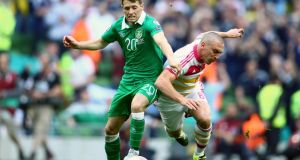 The Republic of Ireland manager seemed to have stumbled upon a system that works. That accommodated Wes Hoolahan. That had Scotland on the rack for 45 minutes and 58 seconds. That’s when it slipped away but the key moment came just after Scotland equalised.

Hoolahan evaded Scott Brown in midfield, casting doubt in the back-pedalling defence before brilliantly presenting Daryl Murphy with a sight of goal on his favoured left foot. This was the moment. The striker nobody expected to start receiving an assist from the creator everyone wanted to start.

That’s three chances now Murphy has missed for Ireland in a week. Two against England as well. I always felt he would be a bit short at this level but he had a good game and may have done enough to stay in the team. But, cruel as it may sound, that was the moment. There should have been more but there wasn’t.

There was a plan and clarity about Martin O’Neill’s team. You could see the hours of work done on the training ground. Even the selections of Murphy and Jeff Hendrick ahead of James McClean and Shane Long seemed justified.

The team’s lop-sided shape with Hendrick, James McCarthy – his best game in a green jersey – and Glenn Whelan stacked to the right, Hoolahan ahead of them and Jon Walters wide right was initially effective.

O’Neill trusted McCarthy’s energy to provide cover for Robbie Brady. Leaving an inexperienced left back so exposed was a dangerous gamble but Brady defended well. What he didn’t do was provide quality crosses when they were needed most.

This new system worked until it didn’t. While ensuring we were not outnumbered in central midfield, it was robbing Peter to pay Paul. A better side than Scotland, and there are two in Group D, would have exploited our exposed left flank.

You could see Hoolahan looking over his shoulder every time Alan Hutton got the ball. There was too much space. McCarthy would shoot out of the middle. A calculated risk that paid off because of sheer desire to be first to the ball. The variety of Shay Given’s kickouts to Murphy and Walters combined with some neat combination play had Scotland in disarray.

When taking a one-nil lead, from one of Brady’s initially troublesome corners, it looked like the Scots wouldn’t recover. Walters was offside for the goal so we even had the dose of luck needed in a game overflowing with tension. We had the correct shape. We had the intent.

Then, 58 seconds into the second half, we had none of the above.

Gordon Strachan’s starting XI helped. Craig Forsyth was there for height but his presence, and Matt Richie in ahead of Ikechi Anya, played into our hands.

Until Strachan changed up at half-time with Anya on and Steven Naismith moving to the number 10 position. That, and a deflected goal by Shaun Maloney off John O’Shea’s back, ended our dominance.

No coincidence that Naismith and Anya had touches before Maloney let fly. It must be put down to a lack of concentration.

Thereafter, the best football we’ve seen from an Irish midfield since I don’t know when was swallowed by the game’s intensity. Hendrick, Hoolahan, McCarthy were no longer as prominent. Scotland squeezed them out. Anya checked Seamus Coleman’s impact down the right.

Suddenly, without any warning, we were transported back to Celtic Park in November. Was the first half a mirage? It was certainly cancelled out by the second 45 minutes.

O’Neill made some brave decisions when chasing the game. He changed the system – well, Strachan, it could be argued, changed it for him. Still, introducing McClean for Whelan was brave. It took the chief protector of the Irish defence out of the game for a natural attacker.

Then he took Wes off and put Robbie Keane on. Hoolahan was always the one, I felt, most likely to create a goal. Keane got one sight of goal from distance and hit his shot straight at David Marshall.

The quality of ball in from Brady deteriorated badly when it needed to be reliable. Scotland defended better than we attacked. They dealt with our best without ever overly straining themselves.

With Hoolahan went the game, as nothing else threatened to unlock our visiting neighbour’s defence.

So, to the consequences. Everyone is beating Georgia and Gibraltar so in reality we are in a mini-group with Germany, Poland and Scotland. From that we have three draws and a defeat so we deserve to be lying fourth. Six handy enough points will come from the next two matches before Germany at home and Poland away. It could come down to needing a win in Warsaw.

It’s not out of our hands yet. O’Neill got decent performances out of a side that lacks the guile to turn a draw into a victory. It left the field with Hoolahan.

That first 45 minutes, while better football than anything we saw under Giovanni Trapattoni’s tightly controlled reign, was not enough.

It’s a shame really because nobody should question the desire of this Ireland squad but Scotland, when we strip it all down, wanted it more in Glasgow and they reinforced that in Dublin.