Bosnia crash out of World Cup with sense of injustice 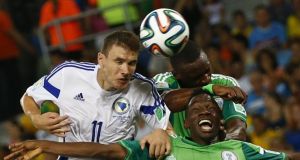 Bosnia’s Edin Dzeko beats Nigeria’s Kenneth Omeruo (22) and Shola Ameobi to the ball as he misses a chance to score a goal during their 2014 World Cup Group F soccer match at the Pantanal arena in Cuiaba. Photograph: Michael Dalder/Reuters

Bosnia-Herzegovina went out of their first World Cuplast night with a sense of injustice over a disallowed goal and regrets that they had not performed as well as they can on soccer’s biggest stage.

“They are all depressed, disappointed, silent,” coach Safet Susic said of his players after they lost 1-0 to African champions Nigeria.

Bosnia cannot now progress after losing 2-1 to Argentina in their first game in Group F.

A tight match hinged on two controversial calls in the first half from the officials, led by New Zealand referee Peter O’Leary.

Bosnia striker Edin Dzeko had a goal incorrectly ruled out for offside and Bosnia also felt that their captain Emir Spahic was fouled in the build-up to Peter Odemwingie’s winning goal.

“Had they allowed the (Dzeko) goal, this would probably have changed the match,” said Susic. “I was told in the dressing room that Dzeko was well onside. As far as the reported foul on Spahic, if the referee didn’t whistle there was no foul.”

Susic said his own team ultimately had to take responsibility for being outfought by Nigeria and profligate in front of goal. “It seems they (Nigeria) wanted it a bit more,” he said.

“You see what kind of chances we wasted, like the one in stoppage time,” he added referring to a scuffed shot from Dzeko which Nigerian goalkeeper Vincent Enyeama deflected on to a post and away to safety.

Susic indicated he felt a Bosnian team featuring players of the quality of Manchester City’s Dzeko and AS Roma midfielder Miralem Pjanic could have produced more. “If our players don’t play at their usual level, it is normal for us to not beat teams of the approximately the same quality,” he added.