Hunt keeps Wolves from the door 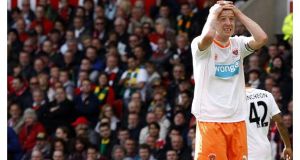 Blackpool’s Charlie Adam can’t believe his luck after a chance goes begging at Old Trafford. The Seasiders were relegated along with Birmingham and West Ham on ‘Survival Sunday’. Photograph: Darren Staples/Reuters

Premier League round-up:Wolves held onto their Premier League status despite going down to fellow strugglers Blackburn at Molineux today. Wolves were ripped apart in the opening 45 minutes with Jason Roberts, Brett Emerton and Junior Hoilett netting for Rovers.

But they responded with second-half efforts from Jamie O’Hara and Stephen Hunt and, with Birmingham and Blackpool both losing, they survived for a third successive season of top-flight football.

Mick McCarthy’s men finished the season one place and one point above the bottom three, with Rovers three points better off. The visitors had their survival all but secured with a fantastic first-half display and took the lead after 23 minutes through Roberts.

A low centre from Michel Salgado was deflected into the corner of the net by the striker who began his career at Wolves but never played a first-team game.

Wolves were struggling to get their two wingers, Hunt and the returning Matt Jarvis, into the game and were relying too much on the long ball. And after 39 minutes a superb strike from Emerton doubled Blackburn’s lead.

Craddock headed the ball out of the Wolves box but it fell to Emerton who volleyed past Hennessey from 25 yards out.

Hoilett nearly made it 3-0 when his low shot flashed inches past the far post. But, with seconds remaining of the half, the Canadian did make it 3-0 with a low shot after cutting into the area.

McCarthy made a half-time substitution, with Sylvan Ebanks-Blake replacing Michael Mancienne. That led to Elokobi switching to centre-half, with Ward dropping back to left-back.

Wolves started the second half in positive fashion, and Hunt should have reduced the arrears within a minute of the restart, but the former Hull player headed wide with the goal at his mercy from a Jarvis cross.

Wolves were getting desperate, but they gave themselves a chance after 72 minutes when O’Hara pulled a goal back. Hunt rolled a short free-kick to the on-loan Tottenham player whose low shot found the corner of the net from 20 yards.

The home side were now on the offensive and Robinson made a fine save to turn over a powerful header from Steven Fletcher. Then with four minutes remaining, Hunt scored a second goal for the home side to make it 3-2. He received the ball on the edge of the Rovers area and curled a shot past Robinson into the top corner as Wolves stayed up by the skin of their teeth.

Carling Cup winners Birmingham slumped out of the top flight as Blackpool went down in a blaze of glory at Old Trafford. On a dramatic final day in which the situation changed over and over again, Birmingham’s 2-1 defeat at Tottenham condemned them to Championship football next season, when they will also play in the Europa League.

They will be joined by Blackpool, who led 2-1 at Old Trafford before being overwhelmed by Manchester United in the latter stages to slip to a 4-2 defeat.

Birmingham looked safe at half-time at White Hart Lane, but when Roman Pavlyuchenko put Tottenham ahead with a sweet curling effort four minutes after the break, they slipped provisionally into the drop zone.

Craig Gardner levelled from 25 yards 11 minutes from time, but with Wolves mounting a comeback at Molineux, they needed a winner and it would not come, with Pavlyuchenko putting the final nail in their coffin in stoppage time.

At Old Trafford, things looked bleak for Blackpool when Park Ji-sung put United ahead after 21 minutes following good work by Dimitar Berbatov, but Charlie Adam levelled with a trademark free-kick five minutes before the interval.

Gary Taylor-Fletcher put Blackpool into an unlikely lead in the 57th minute with a cheeky flick, but Anderson swept the ball home to restore parity five minutes later and Blackpool were back in the drop zone when Ian Evatt turned Chris Smalling’s cross into his own net in the 74th minute.

And it was all over when substitute Michael Owen finished neatly in the 81st minute.

At the Britannia Wigan could have been dead and buried by half-time as Jon Walters had an early effort correctly ruled out for offside, while Emmerson Boyce cleared Kenwyne Jones’ attempt off the line. But Hugo Rodallega headed Wigan in front in the 78th minute and that was more than enough.