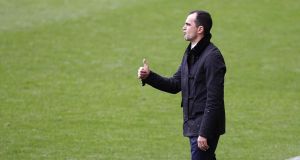 Everton manager Roberto Martinez inherited a solid goalkeeper, strong central defenders and intelligent attacking fullbacks. He arrived to find that half his work had already been done.

The credit managers get for beating Arsenal is undergoing Weimar-style hyperinflation.

There was a time when slamming several goals past the north London outfit could buy a manager a year’s worth of credibility. Now your chairman will scarcely be impressed by a wheelbarrow-load of such results.

Still, Roberto Martinez had never beaten Arsenal 3-0 before in his career so he was entitled to feel thrilled about yesterday’s victory at Goodison Park. At such moments of triumph, a humble manager pauses to give thanks for the support of the friends and allies who have helped along the way.

The manager to whom Martinez owes the most obvious debt is Jose Mourinho. It is thanks to the largesse of the Chelsea manager that Everton’s attack is spearheaded by Romelu Lukaku, who created the first goal for Steven Naismith and scored the decisive second goal with a storming run and finish.

The 20-year-old from Belgium has scored 13 league goals in 25 games, a tally that suggests he should at least match Tony Cottee’s post-1992 record of 16 in the league for Everton.

Lukaku’s record is also a lot better than any of the Chelsea strikers about whom Mourinho spends much of his time complaining. Samuel Eto’o has eight in the league, Fernando Torres four and Demba Ba three.


Prickly Mourinho
The suggestion that letting Lukaku join Everton has turned out to be a catastrophic error of judgment is an ongoing irritation to Mourinho, who suggested earlier in the season that people should ask Lukaku why he had ended up at Everton rather than leading the line for Chelsea. The suggestion seemed to be that the move was the player’s decision, rather than Mourinho’s, and the acid tone hinted that it wasn’t a decision Mourinho had liked.

Lukaku recently explained that he hadn’t fallen out with Mourinho. They had simply had a civilised discussion in which Lukaku explained that he didn’t want to spend a season sitting on the bench, having done so well on loan at West Brom the previous campaign.

Mourinho has since accused the men he presumably believed were good enough to keep Lukaku out of the team of lacking “balls”. He picked a team without any strikers for the match against PSG last week.

There’s no guarantee that Lukaku would have played as well as he has for Everton if he had remained at Chelsea. Not every striker is cut out to handle the pressure of expectation and competition at a club like Chelsea. But his form means Mourinho’s complaints about the resources at his disposal ring a little hollow.

Meanwhile, Martinez should be grateful for the Chelsea manager’s inadvertent largesse. But even Mourinho’s contribution to Everton’s success is as nothing compared to that made by former boss David Moyes.

One of the greatest gifts any departing manager can leave his successor is an experienced, established defensive unit – see George Graham’s legacy to Arsene Wenger. Martinez inherited a solid goalkeeper, strong central defenders and intelligent attacking fullbacks. He arrived to find that half his work had already been done.

But that’s not all. Moyes then spent €33 million on Marouane Fellaini, the one important player at Everton who did not fit into Martinez’s possession-oriented style of play. Moyes ended up paying this fee even though he knew at the start of the summer that Fellaini had a release clause in his contract for €28 million.


Transfer wheeling and dealing
The Fellaini money enabled Everton to sign James McCarthy permanently and loan in Gareth Barry, Gerard Deulofeu and Lukaku, all of whom have proven hits.

Everton’s income this season has been boosted by a near-50 per cent increase in TV money, but the Fellaini sale meant they didn’t have to use the additional TV cash to fund transfers. Instead, they addressed their long-standing debt problem.

Finally, Moyes took Manchester United out of the top four for the first time in more than 20 years, freeing up an extra Champions League place for Everton to pursue.

Moyes is the gift that keeps on giving. And where is the gratitude? All we hear from Everton’s players is how much they are enjoying training under Roberto Martinez, with the unspoken implication that it’s more fun than it was with Moyes.

The internet is awash with statistics favourably comparing Everton’s form this season to what they achieved under Moyes . After 32 games they’ve racked up 63 points, a total exceeded only once under Moyes, with 65 in 2007-08. If they can score at least six more goals in the six remaining games, they’ll have exceeded the highest tally of goals scored under Moyes. Their current run of six successive wins in the league was matched only once in the Moyes era.

And yet they couldn’t have achieved any of this without what Moyes did for them, before and after he left the club.

If Everton qualify for next season’s Champions League, it might be time to think about naming a stand after David Moyes.