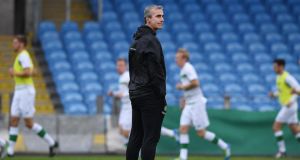 He was offered the post by Roger Schmidt, the former Bayer Leverkusen manager who was announced as Beijing’s new manager early in June. McGuinness, who has been part of the coaching staff at Glasgow Celtic since 2012, will travel to Beijing on Saturday to take up his new role on Monday.

“It’s a fantastic opportunity,” he said yesterday. “It’s a level up for me and a great honour to be asked. Roger is a really prestigious European coach and just to be part of his management team is a great privilege. I also feel that it’s great timing in terms of taking the next step forward in my own coaching career.

“In terms of Celtic, every decision that was made was with their knowledge. Dermot Desmond, in particular, was implicit in any decision made. And I’d like to think that the umbilical cord won’t be cut. Everyone in the club has been hugely supportive and hopefully I will return there someday as a better coach.”

He has agreed a two-and-a-half year contract with Beijing, which is the period for which Schmidt has agreed terms. The offer came out of the blue but McGuinness had met with the German on several occasions over the past two years after being invited to Leverkusen by one of the club psychologists he met in Bilbao two summers ago.

“I happened to mention that I found Leverkusen’s style of play very interesting as Roger was one of the coaches whose approach I was studying very closely. And then we met at one of their Champions League games. And he was very generous with his time. He gave me a few hours on the afternoon of the game.

“They were one of the few football teams that play very direct and intense football predicated on intensity. It is about asking questions of the opposition and trying to overwhelm them and never allowing them to settle. And I was drawn to that. We stayed in touch through email.

“Then I got a text from Roger at the beginning of the summer to say he was going to be in Dublin to meet a sports firm. We met in the airport in Dublin and spent a few hours ahead of his flight to Germany and he walked me through his game plan and style of play. We just had a really good conversation. I feel that we think similarly and share core principles.

“And at the end he asked me to show him Gaelic football because he was curious about it. So we watched the highlights of the 2012 final [when McGuinness’s Donegal beat Mayo 2-11 to 0-13]. The chat was very positive and strong and gravitated towards maybe some time we can work together. And then last week, I got a phone call asking if I would be interested.”

Beijing Guoan won the Chinese Super League for the only time in 2009 and were runners-up in 2014. They play in the 66,000 seat Workers’ Stadium and are among the 16 clubs who feature in a league that has begun to attract high-profile players and managers from Europe.

They are currently sitting seventh in the Super League, after an underwhelming opening which led to the sacking of Jose Gonzalez and the appointment of Schmidt.

For McGuinness, this is the latest chapter of what has been a rapid ascent through the world of sports coaching since he took charge of the Donegal under-21 team ahead of the 2010 campaign. That team finished as runners-up in the All-Ireland final to Jim Gavin’s Dublin. McGuinness was appointed as senior manager in the autumn of 2010.

When he stepped down four years later, Donegal had won the 2012 All-Ireland and three Ulster titles with a style of play which had a radical influence on the game in general.

McGuinness was offered a role with Celtic in 2012. He originally worked as a psychology coach but was coaching Celtic’s under-20 team this season. He has retained his association with Gaelic games through his work as a championship analyst, including a weekly column with The Irish Times which he intends to continue throughout this year’s championship.

“It is kind of surreal,” he said of this latest appointment. “But it does feel like part of that original journey with Donegal because anything that has happened was borne out of that energy that started with the under-21s. And there is no separation there.

“And I am incredibly thankful for that. In fact, one of the reasons that this was an easy decision for me is that Beijing wear green and gold and the number 1992 is on their club crest. So some stars have to be aligning there.”