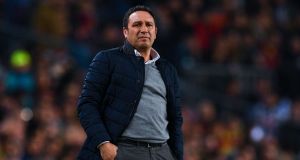 Eusebio Sacristan has no plans to leave Real Sociedad before the end of his contract. Photograph: Getty Images

Eusebio Sacristan has ruled himself out of the running to replace Luis Enrique as Barcelona coach, insisting he sees himself at Real Sociedad for “a long time”.

Eusebio is one of several names being linked as a possible successor to Enrique after the current Barca boss revealed on Wednesday night he would be leaving the Nou Camp at the end of the season.

The 52-year-old Eusebio has close ties to the Catalan giants, making more than 200 appearances for Barca as a player and also coaching Barcelona B for four years before taking charge of Sociedad in 2015.

However, the former Spain midfielder has stressed once again that his future lies in San Sebastian.

Eusebio, who recently agreed a new contract with Sociedad tying him to the club until June, 2019, told a press conference ahead of Friday’s trip to Real Betis: “As I already said when I renewed my contract a little while ago: my mind, my spirit and my desire is to be with Real Sociedad.

“My head is here 100 per cent, so there’s nothing more in it and there’s not going to be.

When asked about a possible release clause in his new contract, the Sociedad boss added: “No matter what my contract says, my head, my hopes and my desire is to have an ongoing project with La Real.

“To be here for a long time, at least for the duration of my contract, with the idea of doing something important at the club. I’m happy here.”

Eusebio led Sociedad to a ninth-placed finish last season and this term they are currently fifth in the table, level on 45 points with fourth-placed Atletico Madrid.

Barca, meanwhile, have won eight trophies out of a possible 10 since Enrique succeeded Gerardo Martino as boss in May 2014, and are still in contention for more silverware this season.

They are a point clear of Real Madrid at the top of LaLiga, play Alaves in the Copa del Rey final and are in the last 16 of the Champions League, although they will need to overturn a 4-0 first-leg deficit against Paris St Germain if they are to progress further in Europe.

Eusebio added of Enrique: “You need to congratulate Luis for the work he has done in his time at the Nou Camp, when the season finishes he will be remembered as a great coach and everyone associated with Barcelona will be eternally grateful to him.”

Among the other names being linked with the Barcelona top job are Diego Simeone, Jorge Sampaoli, Ronald Koeman, Ernesto Valverde and Laurent Blanc.