State of Play: Role of youth coach more challenging than ever 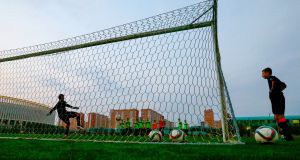 “If we encourage in them a love of learning it will benefit every player, not just the ones who go on to ’make it’.” Photograph: Getty Images

For the majority of football fans it would have been of little interest and so it got little media attention, but the fact that Fulham were recently advertising trials to which parents could bring children as young as five in the hope their talent might be spotted prompted a bit of debate in the coaching community. The English Championship outfit had even suggested that those coming along might wish to indicate which position the youngsters preferred to play in.

In a recent interview Nick Levett (English FA Head of Talent Identification) refers to a conference he attended where someone claimed that they could identify a professional player at the tender age of seven. Nick’s response to this claim is: “Well I can tell you who a liar is. How many people have you said that about and you were wrong?”

Clearly the people running the Fulham initiative think it makes sense to recruit what they regard as the most talented kids early and there never seems to be any shortage of parents willing to offer their children up to the cause of youth development. But is this really supposed to be what the best thing for the kids involved? Or even, for that matter, the clubs?

The reality is that thousands of children are identified at an early age as “prospects”. Parents or youth team coaches see what they regard as the potential to play the game at a high level, and from that point on almost everybody sees themselves as having a stake in the child living up to expectations and achieving success. A tiny percentage do, and as fans we all celebrate their achievements. For the rest, though, it is generally only the players themselves who have to cope with what comes to be regarded as their “failure”.

What we are doing seems like taking a plastic bag full of eggs, throwing it at a wall, finding just one that hasn’t broken then proudly proclaiming: “The system works!”

I struggle with the thought of so many children being asked so early in their lives to put so much into what is essentially regarded as a dream. Parents buy into the process because they are told: “this is what your child will be!” But the assumption that a good player at eight makes a good player at 18 is a major problem. A very low percentage of those entering “the process” become elite athletes. Most fall away somewhere along the line and we hear very little more about them.

As the former athlete, now coach and lecturer, John Kiely puts it: “Nobody sees the dead bodies.”

A huge part of the problem is that this process is designed by adults with the intention of producing adults capable of playing a particular role in an adult world. And somehow the status of the kids who get caught up in it due to their talent means they are treated as “mini-adults”, instead of children, which is what they actually are.

These kids who throw themselves heart and soul into sport deserve responsible and knowledgeable leaders.

A sporting club or organisation is a great resource to society. It has the potential to facilitate positive learning experiences, both on and off the field. But for their youngest members, these are critical years which should include some of their most fun and joy filled days.

The club has a part to play in the child’s broader education; the values, attitudes and behaviour that are cultivated through sport can be positive influences over the course of an entire life-time and if they like playing the game then that should be encouraged too. But it is vital to get the balance right and with this in mind we need to pay more attention to educating the educators.

The role of the youth coach is a more challenging concept than ever. They play a key role in developing and motivating the children they come into contact with. But there is an ever increasing obsession with identifying talent at an ever earlier stage, with many of the changes to children’s sport, however they might be presented in public, tied into these goals.

The evidence suggests, in reality, that giving kids as broad a range of experience as possible for as long as possible has the best outcomes in terms of talent maximisation, but it is also better for their personal development.

We need to remind ourselves, and our coaches, that what we are developing when we work with 10 year-olds on a football pitch, are human beings with their own baggage and history, not merely talented footballers. We need be a little more human (holistic) in our approach.

If we encourage in them a love of learning it will benefit every player, not just the ones who go on to “make it”.

Our starting point should be to embrace diversity and awaken a passion for sport in the kids. Develop feelings of autonomy, competence and relatedness. After which we should be aiming to work with as many young players as possible for as long as possible in the best environment possible.

This more human approach will still encourage the development of talent. In fact it will do so more effectively. But it will also nurture happier young men and women and that, when it boils down to it surely, should be what sport is primarily about.

Originally from Cork, Mark O’Sullivan is a Uefa A licensed football coach based in Stockholm where he works as district coach educator for the Swedish FA. Presently he is also consulting for the Canadian FA on coach education and is involved with Spanish club RCD Espanyol. His blog on coaching and youth development issues can be found at footblogball.wordpress.com