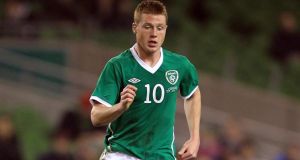 Wigan chairman Dave Whelan is prepared to let Republic of Ireland midfielder James McCarthy leave the club if the right offer comes in.

Quite what that offer is, remains to be seen, but the Championship side are believed to looking to make at least €17.5 million on a player they bought for €1.4m from Hamilton Academical in 2009.

Whelan says he has always assured McCarthy he can leave if and when a suitable offer comes in, but so far that has not been the case.

“I remember when James came down to sign for us with his mum and dad,” said Whelan. “I said to them ‘Listen we’ll look after your son. And when he gets to a level where he’s ready to go, we’ll let him move on’.

“I’ll keep my promise on that one, but the truth is we haven’t had the right deal yet.

“He hasn’t asked for a move and he is really happy here. We may lose one or two yet, we don’t know. The Premier League clubs tend to wait and wait and then step in at the last minute. It isn’t very good for us but what can you do?”

The 22-year-old is expected to get another opportunity to impress would be suitors when he and Wigan take on Premier League champions Manchester United in the Community Shield at Wembley this afternoon (2pm).

After that, he will join up with the Giovanni Trapattoni’s squad in Newport ahead of the international meeting with Wales on Wednesday.