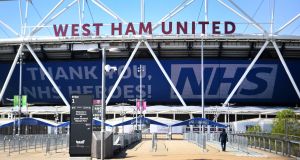 The Premier League is hoping to complete the current season but has not yet announced a date for when the season can resume. File photograph: EPA

An increasing number of Premier League clubs are actively discussing the possibility of bringing the season to an early end, with concerns ­growing over the feasibility of a return even behind closed doors.

The Premier League is suspended indefinitely and, last week, a meeting of the 20 clubs reaffirmed the intention to complete the season when it is “safe and appropriate”. Away from collective discussions, however, clubs are informally talking about the hurdles in the way of a return, with some asking whether the challenges will soon become too great.

West Ham’s David Moyes yesterday became the first manager to publicly question whether the campaign will restart. He said he hoped to continue but added: “The deeper and deeper you look the harder you feel it is to get it up running again.”

The Guardian has spoken to clubs who have raised a range of concerns including over finance and sporting integrity. The most immediate fear, however, regards medical safety.

Clubs were told last week that play would only resume once there was sufficient capacity for Covid-19 testing while a provisional medical plan has been drawn up with club doctors over how to minimise the risk of infection.

But the practicality of the plan was questioned by one club, who argued that players may have to be separated from their families for a month or more to make sure they are not infected. There is also the concern over the amount of testing required, with perhaps multiple tests per person per match being needed, and the possible insensitivity of such a plan when frontline workers in the NHS and other public services are currently not getting the testing they need.

These sentiments have now been echoed by Moyes. “I think we’ve got to realise there are a lot of people whose lives we could be putting at risk,” he said. “We can’t let that happen. I think until we have the testing, which we need for the nurses and the doctors – I’m finding it really difficult to see where the conclusion is and how we can start [TO PLAY].”

The financial complexities centre on the extension of player contracts. If the season were to return in mid-June – a best-case scenario – clubs may have to keep players on large wages who might otherwise have left. Equally some clubs at the bottom would be paying greater wages than they would had they already dropped down a division and activated relegation clauses. It is also the case that some clubs could find themselves in legal dispute with players over extending their deals.

If it were judged safe to play and clubs were able to take the short-term financial hit in the hope of recouping the money later through broadcast revenue, for example, there would remain issues over sporting integrity. A compacted remainder of the league season, with 92 fixtures still to be completed, would take place during the summer months and would have a physical impact on players. Clubs with smaller squads would face a challenge.

One club is believed to consider their squad’s age profile as a disadvantage if a regular rhythm of weekend-midweek-weekend were required. Another raised the issue of what would happen should a player refuse to play over welfare concerns, or if one who had been set for a transfer were selected against their prospective new club.

Moyes also raised the issue of compacting next season as a result of extending this one, with the postponed European Championship to follow. “We’ve got to be careful that we are not asking an incredible amount of the players,” said Moyes, whose team were in 16th place when the season stopped. Outside of the relegation zone only on goal difference.

The issues may be resolvable but it is understood they have not been discussed openly in Premier League meetings. One club official who has been part of the meetings said there had been no attempt to ascertain a ­preferred outcome and none expressed by individual teams. The next Premier League meeting is ­scheduled for ­Friday May 1st. - Guardian

1 Born to ride, born to win: Sam Bennett, the making of a green machine
2 Next stop the Champs-Elysées in green for Sam Bennett
3 Leinster look ready to step things up and burn off Saracens challenge
4 Champions Cup quarter-finals: Kick-off times, TV details, team news and more
5 Let’s face it, Saracens don’t really care that they are rugby’s most hated team
Real news has value SUBSCRIBE