Unconvincing Arsenal see off Leicester City at the Emirates 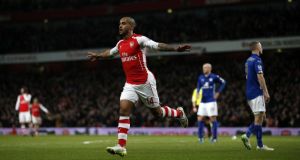 Nigel Pearson says that he can look after himself and so, on this evidence, can his Leicester City team. Two goals down despite having made a decent fist of the first half, they staged a stirring comeback and, when they departed north London, they could not fathom how they had done so empty-handed.

Andrej Kramaric scored his first goal in Leicester colours since his £9m January arrival from Rijeka but it was the ones that got away for him and his team-mates that provided the bitter after-taste for Pearson.

The Leicester manager has been at the centre of a storm since his clash with Crystal Palace’s James McArthur on Saturday, when he appeared to place his hands on the midfielder’s throat and there was the subsequent farce over whether he had been sacked or not. But this was a performance that brought him respite.

It said everything that Arsenal were grateful for the final whistle, the Emirates Stadium crowd having been reduced to living on their nerves as Leicester advertised what would have been a deserved equaliser. The excellent Riyad Mahrez bent inches wide on 72 minutes while Kramaric’s chip, when one-on-one with David Ospina on 79 minutes, did not have enough on it. The ball would not go in for Leicester.

Arsenal had played within themselves and after first-half goals from Laurent Koscielny and Theo Walcott, they might have thought that the job was done. They needed the victory after Saturday’s derby defeat at Tottenham Hotspur. But Leicester showed that nothing can be taken for granted in the Premier League.

Arsenal found themselves in familiar territory, and not only because of the need to bounce back from a shuddering set-back – the well-worn narrative had tracked them from White Hart Lane. Pearson set up with five defenders and four midfielders, with Kramaric as the lone spearhead, and the onus, as ever at this stadium, was on Arsenal to find the way through. Pearson took a seat in the stands at the beginning of the evening and he knew that his new-look back-five merited the description. There were debuts for Matthew Upson, the former Arsenal player, who has been held back by injury, and Robert Huth, the loan signing from Stoke City.

They were confronted by a fluid Arsenal team, with Alexis Sánchez leading the line in place of Olivier Giroud and doing so with plenty of slippery movement, which was mirrored by those with attacking briefs around him.

It was Mesut Özil who helped to smooth the breakthrough. He had fizzed through two excellent passes – the first for Walcott, who was denied by the advancing Mark Schwarzer – and the effect was to instil worry in the Leicester defence.

They seemed to back off Özil when he took a return pass inside the area before rolling his studs over the top of the ball and releasing a quick low shot, which Schwarzer tipped around the post at full stretch. From the corner, which was taken by Özil, Koscielny scored.

Pearson might have wanted to throttle his captain, Wes Morgan, who looked to be on his heels when Koscielny dropped his shoulder and darted towards Özil’s delivery. He got there unmarked, just outside the six-yard box, to enjoy the simplest of side-foot finishes.

Özil was also instrumental in the second goal. Hector Bellerín won possession on the right and Arsenal quickly worked the ball inside to Özil, who was to the left of centre, 30 yards from goal. His shot was viciously struck and Schwarzer could only parry to Walcott, who lashed home an instinctive and unstoppable first-time finish.

Leicester had started well, with Esteban Cambiasso twice releasing Mahrez, with one shot whistling through the legs of Ospina and narrowly wide, while Mahrez then worked his way through on 39 minutes to curl narrowly off target. Per Mertesacker also extended a long leg to deny Jeff Schlupp following a Paul Konchesky cross.

Arsenal had appealed for handball inside the area against Morgan on 33 minutes but they had a much clearer penalty shout for the same offence early in the second half. Sánchez, who was back after hamstring trouble, watched his shot strike Danny Simpson’s hand but the referee, Mike Jones, was unmoved.

This had felt like a daunting assignment for Leicester but they were game and they could reflect on having played a full part in an attacking sense. Mahrez was a constant threat while Kramaric grew into the contest. Pearson had moved down to the dugout just before half-time and he was closer to the action as Leicester staged their second-half fight-back. Kramaric thumped a shot at Ospina while Matty James could not take Simpson’s fine through-ball in his stride inside the area. The travelling fans were in good voice and they grew hopeful when Kramaric drew a wonderful save out of Ospina and then watched Per Mertesacker head his follow-up chip clear.

Leicester were back into it moments later. Arsenal appealed for handball against Cambiasso as he lay prone and battled for the ball before popping it back to Mahrez. His cross was headed clear by Koscielny but only as far as Kramaric, who hammered a low shot through the crowded area and past Ospina.

Arsenal, who lost the substitute, Aaron Ramsey to injury, were jittery and so were the crowd, who groaned when Özil lost possession cheaply. By the end, there was the sense that they were hanging on. Pearson made attacking substitutions but his team came up just short.