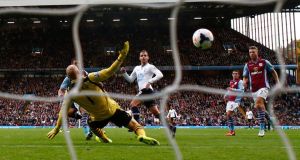 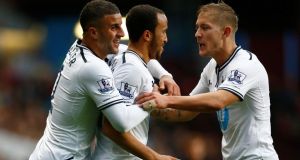 The recent star of England’s World Cup qualification, rewarded with a new contract this week, grabbed the opener and tormented Villa throughout as Spurs got back to winning ways.

Townsend’s 31st-minute goal was actually intended as a cross but his overall performance deserved a goal and set up a victory capped by Roberto Soldado’s 69th-minute second. The game, however, will also be remembered for a more unsavoury incident after assistant referee David Bryan was struck by a firework thrown from the Spurs supporters’ section.

Spurs manager Andre Villas-Boas was delighted to see his team pick up the victory after a disappointing loss to West Brom prior to the international break.

“It was difficult in the first few minutes,” said the Portuguese. “Villa kept putting in long balls behind us, stretching us and we needed to get our act together.

He added: “We did and in the 20th minute we got hold of the ball and started creating. The second half was really, really good and after it was 2-0 we could have scored more. The second goal is always important away from home. It takes pressure off and gave us a little bit more confidence. That was the moment we needed to secure the result.

“After a setback, particularly at home, we had to respond in good fashion to keep ourselves in touch with the top. This was the result we deserved.”

Villas-Boas had surprised by making four changes in response to defeat by West Ham last time out. Vlad Chiriches was handed a Premier League debut and Lewis Holtby a first start while Sandro and Soldado also came in.

Villa striker Christian Benteke, also returning from injury, was only deemed fit enough for a place on the bench but his second half introduction almost changed the game before Soldado made sure.

Villa had an early opportunity when Leandro Bacuna’s cross found Gabriel Agbonlahor but the striker’s shot on the turn flew over. Ashley Westwood was the first player booked when he caught Holtby just above the ankle with a late challenge.

Spurs enjoyed some good possession without creating any clearcut chances and Villa were the next to threaten when Westwood’s free-kick bounced awkwardly in front of Hugo Lloris. Andreas Weimann then shot over and Bacuna sent another free-kick over the bar.

Spurs finally began to make some headway as Townsend, keen to get on the ball at every opportunity, had a dangerous cross headed away by Ron Vlaar. Townsend always looked the most likely Spurs player and it was the new England star who broke through just after the half hour, although scoring was clearly not his intention.

Townsend found room on the right and clipped in a cross inviting Holtby and Soldado to attack. Neither were able to get a touch but it mattered little for Spurs as the ball bounced on past Brad Guzan. Townsend sheepishly accepted the congratulations of his team-mates but attention soon turned to the stands as Bryan was hit by a smoking missile.

The restart was delayed as the matter was cleared up but Bryan appeared unharmed and able to continue. Police and stewards later led away a spectator. The police confirmed after the game that two arrests had been made.

Villa went close to an equaliser as Westwood pulled back a deep cross and Weimann shot narrowly wide. Townsend almost claimed a second on the stroke of half-time when he brought a good low save out of Guzan from the edge of the area.

Paulinho also tested Guzan in the early stages of the second half, forcing the American to push wide with a shot from distance after a Soldado flick. With Townsend continuing to trouble Villa with plenty of runs, Paul Lambert decided to introduce Benteke on the hour. The influential Belgian made an immediate difference to the Villa attack and went close to equalising when he headed narrowly over from a Bacuna cross six yards out.

Benteke then got on the end of a Fabian Delph cross but Lloris saved. Spurs responded to Villa’s renewed threat with an incisive attack of their own and claimed the second goal as Soldado latched onto a clever Paulinho pass and calmly clipped past Guzan.

The visitors did not want to finish there and Townsend cut inside to fire a powerful drive inches over the bar. By now Townsend was rampant as he kept running into space down the right. Yet he was unable to make any further lasting impressions as the game came to a scrappy and ill-tempered end.