Torino could be loan solution for Joe Hart 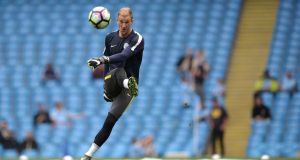 Joe Hart is considering a loan move to Torino, with the goalkeeper conscious that his career could be seriously affected if he fails to leave Manchester City before the transfer window closes on Wednesday.

Hart has been demoted as City’s number one by Pep Guardiola and was again on the bench for Sunday’s 3-1 victory over West Ham United at the Etihad Stadium, where Willy Caballero started.

Torino finished 12th in Italy’s Serie A last term and are seventh with three points after the opening two games of this season. Hart is keen to play regularly and knows that if he does not join the Italian club or go elsewhere his status will drop to third choice. Sunderland, who want a goalkeeper after Vito Mannone was ruled out for a minimum of three months, is not an option for Hart.

Last Thursday, Guardiola signed Claudio Bravo from Barcelona for about £17 million (€19.9 million) to be Hart’s replacement. Caballero is expected to be Bravo’s deputy.

Hart also has his status as England’s number one to protect. He is in Sam Allardyce’s first squad, for Sunday’s World Cup qualifier against Slovakia, but Allardyce has warned Hart that he will have to play on a weekly basis to be considered in the long term.

Allardyce said that omitting Ross Barkley from his first England squad was the toughest decision he had to make. The new England boss, who also confirmed that he would name his captain on Tuesday, left Barkley out of his 23-man squad for this weekend’s World Cup qualifier in Slovakia despite the Everton midfielder having enjoyed a promising start to the season.

The 22-year-old, who was an unused member of England’s Euro 2016 squad, has scored twice in his first four games for Everton, but that was not enough to prevent him being left out by Allardyce.

The former Sunderland and West Ham boss said: “We’ve had to make some very, very difficult decisions, none more so than Ross Barkley. It’s disappointing for him. The door will always be open for Ross, but at this moment I think the squad I’ve named is right.”