The Class of ’92 remember the man who made them, Eric Harrison 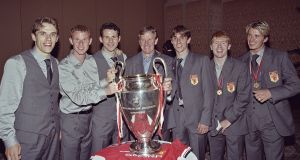 Originally they were called Fergie’s Fledglings, then the Class of ’92, though it was fitting Eric Harrison’s death at the age of 81 led everyone at Manchester United to acknowledge where the credit for a remarkable generation was due.

“Eric we owe you everything,” Gary Neville said. “We’ve lost our mentor, our coach and the man who made us. He taught us how to play, to never give up, and how important it was to win your individual battles.”

United said Harrison served the club “with distinction as a mentor of young players, including a number or prodigies who achieved great success with club and country”.

That number included both Neville brothers, David Beckham, Paul Scholes, Ryan Giggs, and Nicky Butt, as well as Robbie Savage and Keith Gillespie who left United to make successful careers elsewhere. The core of the side who won the Youth Cup in 1992 stayed at the club to win every domestic honour possible and advanced together to long international careers.

A former Halifax, Hartlepool and Barrow player, Harrison had been at United for five years, having joined from Everton in 1981, when Alex Ferguson arrived as the manager. Ferguson reorganised his scouting department soon after taking over but wisely left his head of youth development alone. Harrison led United to Youth Cup victories in 1992 and 1995, and Ferguson praised his ability to instil character and determination into his young charges.

We’ve lost our mentor , our coach and the man who made us. He taught us how to play , how to never give up , how important it was to win your individual battles and what we needed to do to play for Manchester United Football Club. Eric we owe you everything ❤️ pic.twitter.com/iv0uisTGCl

In that Ferguson believed in youth and demanded players who knew how to stand up for themselves and knew what it meant to play for United, Harrison was a perfect fit for the next couple of decades, as the manager who built a treble-winning side around the coach’s products was quick to accept.

“When I came as manager I was lucky enough to have Eric on the staff, so I got to see the work he did, not just with the Class of ’92 but with all the young players,” Ferguson said. “He built character and determination into those players and prepared them for the future. He was a teacher, he gave his players a path, and it was his ability to impart an education, to make good human beings as well as footballers that made him one of the greatest coaches of our time.”

David Beckham, who visited Harrison in 2017 after learning he had been diagnosed with dementia, said he could still hear his coach’s voice, telling him to cut out the Hollywood passes. “I can still see him watching us play at The Cliff training ground, looking down with either a proud smile or a loud bang of his fist on the window, knowing any minute he would be on his way down to advise me in the most polite way to stop playing those passes,” Beckham said.

“More importantly he made us understand how to work hard and respect each other, and not just on the pitch. We won’t forget the life lessons he gave us.”

Having been released by United before playing a senior game Savage had to make a career at Crewe before joining Leicester and then Birmingham but he still has a letter for Harrison encouraging him not to give up on his dream of becoming a footballer. “Eric, along with my family, was the reason I didn’t,” Savage said. “He told me he believed in me and to this day I have always been thankful. He was a massive part of my education.”

Phil Neville, now in management himself along with Giggs and Scholes, described Harrison as being “like a second father” to young players. “On and off the pitch, the way you spoke to the kitman or the canteen ladies, the way you dressed, your time-keeping, he instilled values that stood us in good stead for the rest of our lives. I’m a manager now and the standards I try to give my players are the standards he taught me. He was a truly remarkable man and I’ll be for ever indebted to him.”

The manager of the England women’s team went on to recount how Harrison was still offering advice even after Neville had left United for Everton. “He watched us beat Arsenal 3-1 at Goodison Park,” Neville said. “He rang me to tell me he had seen me turn my back on Thierry Henry, and that was something he used to work on with me every single day. Even when I was 31 he still hadn’t given up on me.

“I would have absolutely loved Eric to grab hold of some of the young players coming through nowadays and put them through what we were put through, because it was special. I don’t get sad when things like this happen, I just feel blessed and lucky I was touched by someone who had an unbelievable effect on my life.”