Everton up to seventh as Leicester’s slides continues 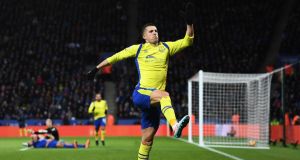 Kevin Mirallas and Romelu Lukaku struck to sink Leicester and hand Everton their first away win since September.

The pair scored breakaway second-half goals to send the Toffees seventh in the Premier League following a 2-0 victory at the King Power Stadium, which increases the champions’ relegation worries.

It was only Everton’s third triumph from their last 13 Premier League games but Ronald Koeman’s side ground out all three points in a low-quality game.

The last time Leicester hosted the Toffees, in May, they lifted the Premier League trophy afterwards, but this time they are three points above the relegation zone.

That the bottom three continue to struggle is a saving grace but boss Claudio Ranieri needs his side to rediscover their spark during a period which he has already said will define their season.

Leicester have won just two of their last 13 games in all competitions and, without the banned Jamie Vardy, rarely looked like scoring.

Around 30,000 Vardy masks were left on seats for supporters before the game, a move widely thought to be a response to the striker’s three-match ban.

The Foxes failed to get his suspension overturned, following a red card at Stoke last week, despite an appeal to the Football Association with boss Claudio Ranieri and owner Vichai Srivaddhanaprabha both speaking out against the dismissal.

FA chairman Greg Clarke attended the game and was photographed pretending to wear a mask but regardless of their feelings, the Foxes must do without Vardy for another two games.

West Ham turned up the heat on embattled Swansea manager Bob Bradley with a 4-1 win at the Liberty Stadium.

Andre Ayew – with his first Hammers goal following his £20.5million move from Swansea in August – Winston Reid, Michail Antonio and Andy Carroll helped the Londoners claim a third successive win for the first time since March.

Fernando Llorente, on as a substitute, claimed a Swansea consolation two minutes from time with his fifth goal in six games, but even then Carroll had the final word.

The victory takes West Ham towards mid-table but these are dark times for Swansea and their American manager, who might not welcome 2017 in a job he was only appointed to in October.

Bradley admitted that his fate might rest on home games against West Ham and Bournemouth, on New Year’s Eve, but the Swansea fans had clearly made their minds up when Reid headed home four minutes into the second half.

“We want Bradley out,” reverberated around the Liberty Stadium as Swansea were consigned to the seventh defeat of the American’s 11-game reign.

Supporters also turned their anger on chairman Huw Jenkins, who had used his programme notes to defend the club’s summer takeover.

But, in the absence of their American owners, Swansea lost for the 12th time this season and are now four points from safety having conceded 28 goals under Bradley.

Andre Gray volleyed in his second Premier League goal 10 minutes from time to earn Burnley a 1-0 win over Middlesbrough at Turf Moor.

The former non-league forward had not scored since netting against Liverpool in August, after which historical homophobic posts on social media came to light that saw the English Football Association hand him a four-game ban.

Last year’s Championship player of the year has not been a regular since returning, but he provided the key contribution in a dull affair here with a late strike that earned the Clarets a sixth home win of the season.