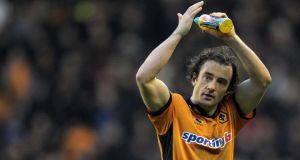 Stephen Hunt may be added to Mick McCarthy’s shopping list at Ipswich Town after the Republic of Ireland winger was released by Wolverhampton Wanderers today.

Wolves were relegated to League One this season and Hunt always semed likely to be jettisoned as costs were cut at Molineux.

Former Wolves boss McCarthy, already thought to be considering a reunion with strikers Kevin Doyle, Sylvain Ebanks-Blake and left-back Stephen Ward, could well offer a lifeline to the 31-year-old free agent, who can play on either wing.

McCarthy signed Hunt for Wolves from Hull City for around €4 million in 2010. In 66 appearances throughout an injury-ravaged three-year spell, Hunt scored seven goals, while he was one of the few positives towards the end of a forgettable season, having returned late from his latest spell on the sidelines.

Sky Sports are reporting Leeds United’s interest in taking former Ireland left-back Ian Harte back to Elland Road, where he made 300 appearances in eight years between 1996 and 2004.

Harte’s contract at Reading, relegated from the Premier League this season, is set to expire this summer.