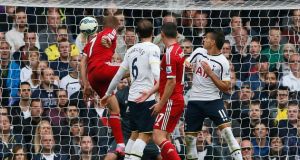 Mauricio Pochettino was supposed to eradicate White Hart Lane performances like this. Instead, the Tottenham Hotspur manager felt the gloom descend as his team stuttered to a deserved defeat against a West Bromwich Albion team that had started the day at the foot of the Premier League table.

The sense of déjà vu was uncomfortable, as Tottenham struggled to create against a well-drilled visiting team and it even took in Pochettino’s mannerisms in the technical area. He crouched on to his haunches like André Villas-Boas while, at one point in the second half, he hurled down a water bottle, Tim Sherwood-style.

At full-time, loud boos rang out from the home support, who know that their next Premier League assignment comes at Arsenal on Saturday evening.

There was no rebound from the 3-0 beating at the hands of Liverpool in the previous home game. This was Albion’s first win here in 30 years but, more importantly, it was a first in the Premier League under Alan Irvine. The goal came when James Morrison tip-toed on to Chris Brunt’s corner to head unmarked into Hugo Lloris’s net and spark an inquest among the Tottenham defence as to how such a diminutive player might have done that. But it had been advertised. Where Tottenham lacked urgency, West Brom were slick and punchy.

It was difficult to reconcile West Brom’s performance with their position in the fledgling table and they might have led much sooner, having started brightly. Craig Dawson looped an early header wide while he accidentally got in the way of a Joleon Lescott shot following a corner. Tottenham struggled all afternoon on Albion set-pieces.

Craig Gardner drew a smart save from Lloris after Morrison’s square ball while Saido Berahino’s hard-running worried the home defence. He had the ball in the net on 37 minutes only to be correctly flagged for offside.

Thankfully for Albion, the controversy of the afternoon did not come back to haunt them. Dawson’s flicked header from Morrison’s corner on the half-hour had sent the ball into Emmanuel Adebayor’s outstretched hand and, if the Tottenham striker had little time to react, his hand was certainly a long way from being pinned to his side. The referee, Kevin Friend, was unmoved.

The Tottenham crowd had begun to chunter midway through the first half. There was sloppiness about their team, with Vlad Chiriches especially culpable and Pochettino could be seen demanding greater intensity from his players. Chiriches was not the only sub-standard Tottenham performer.

Erik Lamela showed quick feet and an eye for the dangerous cross but it was clear to every Tottenham fan that more was needed from the team. Their best moment of the first half stemmed from Christian Eriksen’s through-ball for Adebayor. Lescott, though, did just enough to knock Adebayor from his stride. Adebayor was also inches from getting something on Eriksen’s whipped delivery from the left.

Tottenham faced a familiar problem – the need to unlock resolute opponents who carried a threat on the counter against the backdrop of a nervy atmosphere. Pochettino made bold substitutions, introducing Roberto Soldado and Paulinho for the ineffective Nacer Chadli and Mousa Dembélé on the hour and switching to two strikers while he later brought on Aaron Lennon for Étienne Capoue.

But the overall performance was laboured and, despite the best efforts of Lamela, lacking spark. Tottenham’s only effort on target came in the 70th minute, when Soldado worked Ben Foster at his near post.

Albion sat deeper in the second half but they carried a threat, particularly through the excellent Berahino, who almost beat Lloris with a swerving shot on 55 minutes. Morrison had also extended the goalkeeper before he found a way to the decisive moment. It was no more than he and Albion deserved.