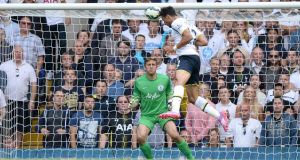 Harry Redknapp offered a puff of the cheeks and a quick handshake to those in the opposing dug-out at the final whistle to suggest he was rather more relieved to be departing Tottenham Hotspur this time round. There was to be no happy homecoming for the Queens Park Rangers manager on his first return to the club he once took to the Champions League, his current charges dispatched by a rampant Spurs team relishing life under their latest management team. Glenn Hoddle, Steven Caulker and even Bobby Zamora will have shared his eagerness to make a sharp exit.

This was a brutal early season reminder of how ruthless life can prove in the top flight. Rangers, awkward in their adoption of Hoddle’s favoured system of three centre-halves, had been ripped to shreds before the interval, the restoration of a back four thereafter far too belated to salvage anything from this contest. They still conceded another, the newly promoted side always vulnerable, their midfield and porous rearguard steamrollered by a Spurs team whose perfect start to the campaign is maintained.

It will take time for Mauricio Pochettino to make this truly his team, a group eagerly squeezing the life and ambition from opponents high up the pitch, but just two league games into his tenure as manager and that frenzy of transfer business conducted last year in anticipation of Gareth Bale’s record sale to Real Madrid is finally starting to feel inspired. Those who had laboured last year appear reborn. Etienne Capoue was commanding at the base of the hosts’ midfield, unflustered yet powerful in disrupting what rhythm the visitors could muster. Nacer Chadli, wandering in-field from the flank and timing his arrival cleverly, contributed two neatly taken goals as if celebrating this as a fresh start. And then there was Erik Lamela.

The Argentine had only contributed three Premier League starts last season after his €30m move from AS Roma before injuries, combined with a certain scepticism among the coaching staff, wrecked his chances of making an instantly favourable impression. Yet, having inspired his side to victory in a Europa League qualifying success in Cyprus in midweek, the winger revelled again here. QPR could not cope with his darts into space, invariably fuelled by the outstanding vision, invention and control of Christian Eriksen at his side, with his delivery sharp and accurate. It was his corner that was flicked beyond Rob Green at the near-post by Eric Dier, the young defender following up his winner at West Ham the previous weekend. It was Lamela, too, who centred for Chadli to power his second of the afternoon down and beyond the beleaguered Rangers goalkeeper to extend the hosts’ lead further.

The Belgian winger, a €9m arrival from Twente a year ago, had paved the way for the rout by collecting Emmanuel Adebayor’s centre on his chest early on and guiding a right-footed shot beyond Green as he fell. The centre had arced over Richard Dunne at the far post, the former Republic of Ireland defender’s discomfort epitomising QPR’s teething troubles with this recently adopted system. He did not reappear after the interval, Nedum Onuoha dropping in at right-back in a back four, though Spurs were not finished. When Chadli poked Danny Rose free down the left, the full-back’s centre flicked off an anxious Rio Ferdinand on the stretch and was side-footed home eagerly by Adebayor to register his side’s fourth.

Redknapp’s team had threatened only sporadically, Matt Phillips clipping wastefully over the bar having wriggled away from Younes Kaboul and Zamora blazing high into the stand when the goal gaped late on. The sight of Caulker planting a point-blank header wide of a post in stoppage time summed it up. Yet when the returning manager responded to the home support’s chorusing of his name, requesting acknowledgement, his wave to those in the Park Lane end provoked a furious reaction from the away fans. Theirs has been a sluggish start to life back in the elite.