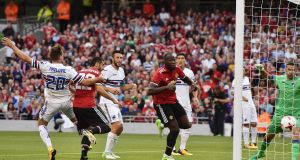 Manchester United returned to the Aviva Stadium on Wednesday night for the first time since 2010, when they helped mark the ground’s opening with a 7-1 friendly win over a League of Ireland XI.

Since that fixture there have been five major trophies – including two league titles – as well as the managerial departures of Alex Ferguson, David Moyes and Louis van Gaal, and the arrival of Jose Mourinho.

It certainly feels a lot longer than seven years since United were last at Lansdowne.

Mourinho’s United are about to embark on a potentially era-defining second season – and they were in Dublin for one last run out before their campaign gets properly underway against Real Madrid in next Tuesday’s Uefa Super Cup.

Around four thousand United fans will make the long trip to Skopje next week – with most travelling to Macedonia via Greece and Bulgaria.

On Wednesday 50,000 enjoyed a slightly less arduous journey down Lansdowne Road, as United warmed-up for their first competitive fixture of the season with a 2-1 win over Italian side Sampdoria.

Those present paid through the nose for the privilege, with tickets for the friendly game costing as much as €85.

In comparison, tickets for next week’s Super Cup start at £14, while tickets for the Europa League final win over Ajax started at €45.

In some respects, those in Dublin got off lightly. A ticket to watch United beat Manchester City in Houston cost $170. Tickets for the 3-0 win over Real Salt Lake set supporters back $300.

And it wasn’t just the club looking to cash in on United’s seventh and final pre-season friendly – the city centre’s swagmen were flogging half-and-half scarves alongside Conor McGregor versus Floyd Mayweather t-shirts as early as Monday.

But while it may have been the final leg of what is essentially a summer marketing programme, the game did provide a rare chance for a section of United’s vast Irish support to see their red-shirted heroes in the flesh.

Indeed, the majority of what was officially sell-out crowd were children, teenagers and families – albeit with a small pocket of travelling fans from Genoa making most of the early noise.

Mourinho’s starting XI gave a nod towards his plans for back-to-back European champions Real Madrid next week, and he opted for the 3-5-2 formation which was the in-vogue across the Premier League last season.

With Eric Bailly and Phil Jones both suspended for the trip to Skopje, the back three picked itself – Chris Smalling starting in between Daley Blind and new signing Victor Lindelof.

Blind was involved from the outset – his kamikaze back pass forcing David de Gea to claw the ball away from goal and concede an indirect free-kick just outside his six-yard box.

In schoolyard fashion, all 10 red shirts packed the goal line as veteran Fabio Quagliarella stood over the set-piece and thrashed it at Chris Smalling.

The ball was scrambled clear and United broke down the right. Henrikh Mkhitaryan switched the play to Matteo Darmian and his cross towards the back post was bundled home by the Armenian.

It was a frantic opening befitting of what was a carnival atmosphere on the terraces, but after taking the lead on eight minutes United soon settled and began to dictate proceedings, with Romelu Lukaku’s barrelling runs down the inside right channel proving particularly effective.

For fans of a certain vintage, the name Sampdoria will bring back memories of Football Italia, James Richardson and an era when Serie A was exotic, mysterious and comfortably Europe’s best league.

Yet while they can still lay claim to having one of football’s coolest kits, Sampdoria’s early 90s pomp – when Gianluca Vialli and Roberto Mancini led the club to their only Serie A title in 1991, and the European Cup final a year later – is a distant memory.

Marco Giampaulo’s side finished 10th in Italy last year, and spent large swathes of the opening half in Dublin chasing shadows in the late-evening sunshine, with United controlling the midfield.

That was largely thanks to Mourinho’s latest summer acquisition, Nemanja Matic. It might have only been a friendly, but the Serb made a very good first impression – particularly with one fan, who received a hug off the rangy midfielder after an errant pass had clocked her on the head.

Matic’s United debut predictably lasted just 45 minutes – but while Mourinho made four changes at half time he kept his back five intact until the 60th minute, when Blind was replaced by Anthony Martial. Lukaku also departed for Marcus Rashford – the Belgian is almost certain to make his competitive United debut against Real next week.

Minutes after that change, Sampdoria were level. Smalling failed to turn away a low cross and Dennis Praet stroked it past De Gea from the edge of the box.

The occasional burst of pace from Martial and Rasford aside, it was a sloppy second half showing from United, and as the game petered out the crowd finally succumbed to a Mexican wave – another reminder, if you needed one, that this was a friendly.

But with less than 10 minutes to go, Martial made another good dart down the left and pulled the ball back to Juan Mata, whose cute finish ensured United ended their pre-season in style.

For another year, the travelling summer circus is over – time for the real business to begin.