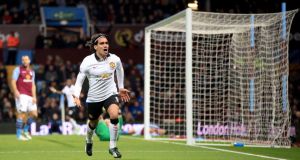 Gabby Agbonlahor’s controversial red card after a 50-50 challenge with Ashley Young forced Villa to play the final 25 minutes with 10 men, but they held on to end United’s six-game winning streak and earn a deserved point.

Falcao had been recalled with James Wilson dropped while midfielder Darren Fletcher returned for the ill Marouane Fellaini.

Delph had not started since dislocating his shoulder in October while Vlaar had been out for over a month with a calf problem, but they replaced the suspended Kieran Richardson and Tom Cleverley, while Andreas Weimann came in for Charles N’Zogbia and Matt Lowton was recalled for the banned Alan Hutton.

The changes made Villa stronger but United bossed the opening stages with the hosts unable to break out of their half.

It took 17 minutes for the visitors to force Brad Guzan into action, though, when he got down low to gather Robin van Persie’s angled volley.

But despite their territorial domination United found themselves behind after 18 minutes thanks to a piece of Benteke brilliance.

Delph lofted in a free-kick to the Belgian striker who took it on his chest, left Jonny Evans for dead and curled a wonderful effort into the top corner from 16 yards.

It was against the run of play but lifted Villa as United struggled to find creativity.

Guzan palmed away Young’s cross but Louis van Gaal’s side did not do enough to break Paul Lambert’s men down.

Plenty of possession but little penetration meant the hosts were able to quell any United threat with a degree of ease.

Fletcher was replaced at the break by Tyler Blackett but United were almost 2-0 down when David de Gea superbly turned Benteke’s powerful header over two minutes after the re-start.

United needed an extra gear and almost found it when Wayne Rooney’s brilliant pass found Van Persie but Guzan was equal to his shot.

But they deservedly levelled after 53 minutes through Falcao, who thumped a header past Guzan from Young’s cross.

It had been coming and Van Persie’s acrobatic volley flew over as United looked to take full control.

Villa’s task then got even harder in the 65th minute when Agbonlahor was harshly sent off.

The striker chased a loose ball with Young and caught his former team-mate in a 50-50 challenge.

It looked an unavoidable collision in midfield but referee Lee Mason produced a shock red card for the Villa man.

It was Villa’s second red card in two games but they rarely looked like conceding after that.

And in stoppage time Benteke was inches away from Bacuna’s cross as Villa nearly snatched victory at the death.