All the injury and suspension details ahead of the weekend fixtures 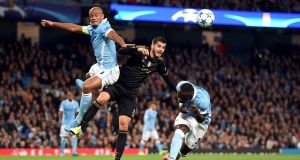 Manchester City captain Vincent Kompany is set to return to the side for the Premier League game against Tottenham Hotspur at White Hart Lane. Photograph: Martin Rickett/PA

Tottenham Hotspur (9) v Man City (1) - Live BT Sport 1, 12.45
Tottenham are expected to welcome back a number of rested players. Hugo Lloris, Kyle Walker, Jan Vertonghen, Toby Alderweireld, Dele Alli and Son Heung-min were all left out of the starting XI against Arsenal on Wednesday, but are likely to return at White Hart Lane. Ryan Mason remains sidelined with a knee problem while Alex Pritchard, Nabil Bentaleb and Mousa Dembele have ankle injuries and also miss out.

Leicester (4) v Arsenal (5)
Claudio Ranieri will make several changes to his Leicester team after swapping 10 players for the midweek Capital One Cup win over West Ham. Some of those who played in the third-round tie have given the Italian food for thought, but the likes of Kasper Schmeichel, Ritchie De Laet, Wes Morgan, Danny Drinkwater, Ngolo Kante, Riyad Mahrez and Jamie Vardy are all expected to return to the starting line-up. On-loan winger Nathan Dyer (knee) remains out injured.

Arsenal will be without defensive midfielder Francis Coquelin because of a knee problem. Midfielder Santi Cazorla returns from a one-match suspension after his red card at Chelsea, but defender Gabriel must await the outcome of an appeal against his Football Association charge of improper conduct at Stamford Bridge, which could see him suspended. Jack Wilshere has had an operation on a hairline fracture in his left fibula, while forward Danny Welbeck and Czech midfielder Tomas Rosicky (both knee) are also sidelined.

Liverpool (13) v Aston Villa (17)
Liverpool striker Christian Benteke is likely to be sidelined for some time by a hamstring problem and is one of a number of absentees. Forward Roberto Firmino has a suspected cracked bone in his back while Dejan Lovren is also sidelined for a few weeks with a ligament injury. Captain Jordan Henderson will be out for up to eight weeks after undergoing an operation on a broken bone in his foot but striker Daniel Sturridge returns to the squad having been rested for the midweek Capital One Cup tie.

Idrissa Gueye could return for Aston Villa after recovering from a hamstring injury. The midfielder has returned to training following a visit to a specialist in France last week and is in contention for the trip to Liverpool after missing Villa’s last three games. Gabriel Agbonlahor is a major doubt after coming off at half-time in Tuesday’s 1-0 Capital One Cup win over Birmingham with a calf injury but Adama Traore is training again following an ankle problem.

Man Utd (2) v Sunderland (20) - Live Setanta Sports 1
Louis van Gaal will be forced to field a makeshift defence. Luke Shaw (broken leg), Marcos Rojo (hamstring) and Paddy McNair (unspecified) are all injured so Ashley Young could start at left back. Centre back Phil Jones is in the squad after making his comeback off the bench in United’s 3-0 win over Ipswich on Wednesday.

Central defender Younes Kaboul returns to the Sunderland squad after suspension. Kaboul missed the 4-1 Capital One Cup defeat by Manchester City following his sending-off at Bournemouth last weekend, but is now available as the Black Cats once again go in search of their first league win of the campaign.

However, midfielder Jack Rodwell (ankle) and striker Jermain Defoe (hamstring) are doubts for the game, while full-back Adam Matthews remains on the sidelines with an ankle problem.

Southampton (16) v Swansea (7)
Left back Ryan Bertrand could make his first start of the season for Southampton, having come off the bench in the Capital One Cup win at MK Dons following a knee injury. Graziano Pelle is in line to return from a foot complaint that forced the striker out of Wednesday’s match, although Dutch midfielder Jordy Clasie is not expected to return until next week’s trip to Chelsea.

Swansea have no injury concerns. Manager Garry Monk made 10 changes for the Capital One Cup defeat at Hull in midweek, with only Gylfi Sigurdsson retained from the previous league game, but he is set to revert to the side which played out a goalless home draw against Everton last weekend. That means midfielder Jack Cork will come up against his former club for the first time since leaving Southampton in January.

Stoke (18) v Bournemouth (14)
Stoke have forward Mame Biram Diouf and midfielder Charlie Adam back. Diouf has missed the last two games recovering from minor hamstring and groin problems, while Adam has been serving a three-match suspension. Other than skipper Ryan Shawcross (back) being unavailable and fellow defender Marc Wilson (calf) a doubt, boss Mark Hughes has a full squad to choose from and is likely to restore some of the players who sat out the midweek Capital One Cup victory at Fulham, including key playmaker Bojan Krkic.

Eddie Howe is expected to revert to much of the Bournemouth team that last weekend defeated Sunderland 2-0. The manager overhauled his starting XI for Tuesday’s penalty shoot-out victory at Preston in the Capital One Cup, selecting squad players including Christian Atsu and Yann Kermorgant. Howe, however, remains without injured captain Tommy Elphick, in addition to long-term absentees Tyrone Mings and Max Gradel.

West Ham (3) v Norwich (11)
West Ham boss Slaven Bilic has no fresh injury concerns. The Hammers could hand first starts to deadline day arrivals Nikica Jelavic and Michail Antonio after both were cup-tied for the extra-time defeat in the Capital One Cup third round at Leicester on Tuesday night. Andy Carroll could make his first league start since January, but is likely to be on the bench with Diafra Sakho recalled in attack, while Angelo Ogbonna (hamstring) is a major doubt with Alex Song (ankle) and Enner Valencia (knee) definitely out.

Norwich will have midfielder Alex Tettey back from a one-match suspension, but on-loan Irons winger Matt Jarvis is not eligible to face his parent club. Striker Gary Hooper (ankle) remains sidelined, but Kyle Lafferty could be involved after the Northern Ireland international scored in the midweek Capital One Cup win over West Brom. Midfielder Youssouf Mulumbu continues his recovery from a fractured metatarsal.

Newcastle (19) v Chelsea (15) – Live Sky Sports 1, 5.30
Newcastle striker Aleksandar Mitrovic will return from his three-match ban. The Serbia international, who was sent off against Arsenal on August 29th, is available, but fellow forward Papiss Cisse (back) will be missing once again. Daryl Janmaat has recovered from illness, but fellow full back Massadio Haidara faces a late fitness test on his knee injury, while midfielders Jack Colback and Rolando Aarons are struggling with calf problems and defender Paul Dummett (hamstring) and midfielder Cheick Tiote (knee) are still out.

Watford (10) v Crystal Palace (8) - Live Sky Sports 1, 4.0
Watford boss Quique Sanchez Flores has no fresh injury concerns. Midfielder Valon Behrami remains suspended following his sending off in the win over Swansea, but Miguel Britos is in contention after serving out his own three-game ban. Forwards Victor Ibarbo and Obbi Oulare are yet to make their Hornets debuts following deadline day moves and both will be looking to be involved for the visit of Palace.

Crystal Palace boss Alan Pardew will check on the fitness of four players. Damien Delaney (groin) could be available despite limping off against Charlton in midweek, while Scott Dann (groin), Joel Ward (knee) and Mile Jedinak (hamstring) are close to returning. But Connor Wickham is still out with a rib injury and fellow striker Marouane Chamakh has a long-term hamstring problem.

West Brom (12) v Everton (6) - Live Sky Sports 1, 8.0
Boaz Myhill is likely to return in goal for West Brom after Anders Lindegaard was given his debut in Wednesday’s Capital One Cup 3-0 defeat at Norwich. Boss Tony Pulis made 10 changes for the trip to Carrow Road but is expected to recall most of those rested in midweek. Pulis wanted to give Salomon Rondon, Chris Brunt and Gareth McAuley a break following international duty, but Ben Foster is unlikely to be fit much before Christmas after suffering a setback in his recovery from a cruciate knee ligament injury.

Everton defender John Stones is a doubt. The centre back sustained a knee injury in the Capital One Cup and will be given as long as possible to see if he is available, as will fellow defender Seamus Coleman, who has missed the last two games with a hamstring problem. Forward Kevin Mirallas serves the second part of a three-match ban.

1 Owen Doyle: Creeping professionalism of schools rugby a threat to the game
2 Officials and referees brace themselves as new GAA rules kick in
3 Niall Quinn happy to step into the breach at FAI
4 Cox calls for a more relaxed transfer regime in the GAA
5 McNamara outlines the scale of opportunity for Ireland’s U-20s
Real news has value SUBSCRIBE