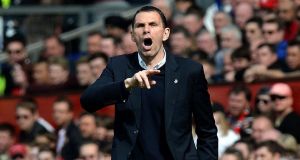 As a player Gus Poyet would have been horrified to find himself finishing a season just above the Premier League’s relegation zone but says doing so as a manager would represent his greatest achievement.

A draw at home to West Bromwich Albion tonight should be enough to secure Sunderland’s status for another year given a vastly superior goal difference which is likely to make whatever Norwich City do against Arsenal on Sunday irrelevant.

After the club spent most of the campaign at the bottom of the table Poyet had said survival would involve “a miracle” and now it is on the verge of completion. Wins at Chelsea and Manchester United, a home victory against Cardiff City and a draw at Manchester City have left the manager entitled to feel extremely proud.

“It will be my biggest achievement. I have no doubt because it’s been difficult, I can tell you,” said Poyet, who inherited a side with only one point from seven games. “Staying up will nearly, probably, feel like winning something,” added Poyet. He hopes any complacency in his squad would have been erased by Crystal Palace’s comeback to draw with Liverpool after falling three goals behind at Selhurst Park on Monday night.

Concentration critical
“The Liverpool result was perhaps good for us,” said Poyet. “After that game we agreed anything can happen. You need to be spot on in the Premier League. We need to concentrate [against West Bromwich]. I don’t want it [the relegation issue] to go to the weekend.”

Instead he hopes there will be a party atmosphere when Swansea City visit the Stadium of Light on Sunday. “If you’d said before the Manchester City game we’d be here talking like this, I’d have said you’d been drinking,” he said. “The last four games have been amazing.”
Guardian Service

Grand National hero Rachael Blackmore on the mark at Fairyhouse 19:32
Solskjaer’s son has the appetite for a go at Mourinho 18:50
Pep Guardiola in relaxed mood as Manchester City look to seal semi-final berth 18:23
Leinster face Sunday showdown with La Rochelle in Champions Cup 16:29
Return of club rugby will involve non-contact element after long lay off 15:28