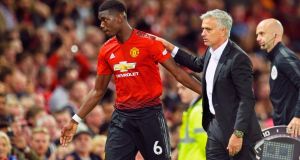 José Mourinho with Paul Pogba at Old Trafford: if the 25-year-old’s erratic form continues to be a head-scratcher his manager it becomes a bigger conundrum with each match. Photograph: Peter Powell/EPA

In Manchester United’s ongoing insipidness under José Mourinho a perfect storm of problems is found. The manager seems to have lost his mojo – momentarily, at least. An elite band of players are underperforming and failing to take on-field responsibility.

And in the Glazers the club has near anonymous proprietors whose preference for safety-first managers post-Sir Alex Ferguson – Mourinho, David Moyes and Louis van Gaal – signals a muted ambition that aims for a Champions League berth rather than the title glory that might have them appointing an attack-first coach such as Pep Guardiola.

For now Mourinho retains the backing of the Glazers, and Ed Woodward, the executive vice-chairman, following Sunday’s dismal 3-2 defeat at Brighton. Yet for the Portuguese’s future to be an issue after only two matches points to the sense of drift and makes any optimism he can engineer the kind of step-change Guardiola brought to his runaway champions, Manchester City, appear distant.

Mourinho cannot argue he has failed to be backed in the market. The nine frontline players recruited for £289.3m – before generous salaries are factored in – during his five windows in charge is evidence. Paul Pogba (£89.3m), Nemanja Matic (£40m), Alexis Sánchez (swap), Fred (£55m), Henrikh Mkhitaryan (£30m), Victor Lindelöf (£31m), Eric Bailly (£25m), Diogo Dalot (£19m), and Zlatan Ibrahimovic (free) have walked through the door since Mourinho did.

These lists offer a full picture of the footballers Mourinho has worked with since replacing Van Gaal. To scan the names is to provoke a glaring question: by now should Mourinho have gelled a genuine title-challenging unit and not one that can defeat Leicester City 2-1 on opening day and go down in powder-puff style at Brighton?

The answer is surely yes. If in Schweinsteiger, Schneiderlin, Depay, Rooney, Mkhitaryan, Ibrahimovic and Januzaj there is scant argument (for reasons of ability and age) regarding those Mourinho has allowed to depart, the band of 23 – once the emerging Scott McTominay is added – he has to work with should allow a potent XI supported by strength in depth.

On paper – where matches are never won, of course – it appears a formidable cadre yet United continue to stumble.

Blame must be split between manager and players. Mourinho’s forte is defence: in his two seasons United have allowed the second-lowest number of league goals – 29 and 28 – so the rearguard is of championship-contenders standard.

If Mourinho can field an attack of Lukaku, Lingard and Sánchez, supported in midfield by the effervescent (on occasion) Pogba, metronomic Matic and dynamic Fred, as chief-coach, tactician and motivator the manager has to draw more from the team or United should consider employing one who can.

Yet all professionals, particularly those who play for elite clubs, should be able to take charge of their own destiny too. The displays of Pogba versus Leicester and Brighton offer a microcosm of the travails under Mourinho.

Against Leicester the midfielder drove the side supremely as a near-irresistible force. Against Brighton he was near-awful and left to reflect that “they had more hunger than us. I put myself first, my attitude was not right enough”.

This sums up Pogba – and the side’s inconsistency – under Mourinho. And if the 25-year-old’s erratic form continues to be a head-scratcher for his manager it becomes a bigger conundrum with each match.

Mourinho has eight domestic titles in four nations – Portugal, England, Italy and Spain. There is also a host of domestic cups, a Uefa Cup and the Europa League plus two Champions Leagues – with continental minnows Porto and Internazionale, the latter bridging a 45-year gap for the club, as Mourinho landed the first treble in Italian football history.

Yet the bounce of Mourinho in his first tenure at Chelsea (2004-07) and at Inter (08-10) is glimpsed only rarely. In two years at United Mourinho has won the Europa League and League Cup (16-17) and finished second in the Premier League and lost the FA Cup final (17-18). But United remain a disjointed side. They are light years from the relentless City machine built by Guardiola, which before United’s humbling on the south coast was trouncing Huddersfield Town 6-1 at a relative canter despite missing Kevin De Bruyne.

Mourinho has to take a share of responsibility or else why is he (or any manager) in position? Yet beyond his and the players’ collective culpability, questions have to be asked of the Glazers. To date none of their managerial appointments have worked. Mourinho may still do but the clock ticks on the time he may be allowed. If he does go, whom the owners turn to will reveal, again, how much a 21st top-division title is really wanted.

Victory over Tottenham Hotspur on Monday at Old Trafford and at Burnley before the international break would quieten the noise around Mourinho. But the deep fault-lines at the club may remain and manger and team may continue to struggle.

Put another way: transforming United into a real threat to City this season may be the greatest challenge of Mourinho’s so far gilded career.