‘We’ve had three games at home and we’ve got only four points. It’s not enough’ 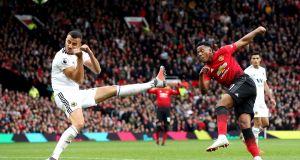 Paul Pogba delivered a damning verdict on Manchester United by admitting they lacked the desire required to beat Wolves, and declaring they need to attack more to restore the fear factor at Old Trafford.

“It’s true that maybe we should have showed more hunger in some parts,” said Pogba. “Maybe the attitude should be better and we should play better.”

While Alex Ferguson made his return to Old Trafford four months after having a brain haemorrhage, Mourinho’s team scarcely conformed to the attacking traditions of the Scot’s finest sides. While the Portuguese bemoaned slow starts to each half, enabling Wolves to settle into the game, and Pogba accepted he was culpable for their equaliser, the midfielder voiced a belief that if United adopted a bolder approach they would be able to intimidate opponents into submission.

“We should play much better against Wolves,” he said. “When we are at home we should attack, attack, attack. That’s Old Trafford. We are here to attack. I think teams are scared when they see Man United attacking and attacking. That was our mistake today. We’ve had three games at home and we’ve got only four points. It’s not enough.”

The Wolves midfielder Rúben Neves underlined Pogba’s point by arguing the visitors’ fearless approach helped them take a first point at Old Trafford since 1980. “They are not superheroes. They are players, and if we do things well we can make it difficult for other teams.”

The statistics support Pogba’s theory that United are insufficiently adventurous on their own turf. Over the course of Mourinho’s reign they have scored 67 home league goals, at least 24 fewer than the rest of the “big six” and 42 fewer than Manchester City. Bournemouth and Everton have been more prolific in front of their own crowds, while United have not given the Old Trafford faithful three goals to celebrate since January.

If the paying public were docile on Saturday, so were some of Mourinho’s attackers. “Not a lot of movement in front,” noted Pogba.

Last month he suggested he would be fined if he said what he really thought. Once again he hinted it would be undiplomatic to reveal his true beliefs. “Obviously we should show more options of playing but I cannot say that because I’m a player. That’s my way of thinking: we should move better, we should move more.”

Perhaps Jesse Lingard, the most mobile of that static front three, merited least criticism. Yet the fact the Englishman was removed as United chased a winner felt significant. There was something predictably familiar about Marouane Fellaini lumbering forward in the closing stages. He is still Plan B.

He is now also part of Plan A, anchoring the midfield in Mourinho’s strategy to shield the soft underbelly of his defence. Tellingly Fellaini, rather than Chris Smalling or Victor Lindelöf, was often marking the Wolves target man Raúl Jiménez at goal kicks.

Smalling has outscored Alexis Sánchez since the Chilean’s arrival at Old Trafford. “It’s not that he is playing bad,” insisted Pogba, though the player who was a talismanic figure for Arsenal has been substituted on his last three starts. “When you play a long time with another team and you play different football in that other team you have to have some kind of adaptation,” said the Frenchman.

Yet Sánchez’s United career, besides having an adverse effect on Anthony Martial and Marcus Rashford, has now spanned eight months and 23 games. How long does the adaptation process take? If the theory was that a rare summer off would enable him to regain his sharpness, he has arguably impressed in only one of his five appearances this season, away at Burnley. “He is a hard worker,” Pogba insisted.

The club without a true title challenge since Ferguson’s days in the dugout is already playing catch-up. Mourinho’s charges find themselves eight points off the top. “It’s not that we should get worried but we should obviously get closer,” Pogba added.

The broader concern, however, is that United may be getting further away. And not just in terms of points.