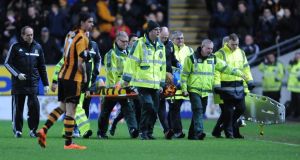 Paul McShane looks certain to miss the Republic of Ireland’s clash with Serbia at the Aviva stadium on March 5th, after suffering a nasty ankle injury in Hull City’s 1-0 defeat to Southampton at the KC stadium.

The Wicklow man suffered the injury in an accidental collision with his own goalkeeper Steve Harper. Hull boss Steve Bruce explained: “He’s had X-rays which have revealed no break but the video evidence doesn’t look great...his ankle is in a horrible position. We fear ligament damage, which we know can be worse than a break.”

Ireland boss Martin O’Neill is due to name his squad for the Serbia game tomorrow week.

Fonte was left with a black eye following a training ground bust-up with Osvaldo last month, an incident that hastened the striker’s deadline-day switch to Juventus.

The Portuguese defender, meanwhile, remains a key part of Pochettino’s side and his 69th-minute goal — confirmed via the Goal Decision System — offered the manager a chance to underline his strict belief in the group dynamic.

Osvaldo was not mentioned by name following the 1-0 victory at the KC Stadium, but his shadow loomed large over Pochettino’s post-match remarks.

“(The incident) is completely forgotten, it is in the past and we can only look forward right now,” he said. “But I have always said the group mentality is the most important thing.

Fonte’s goal capped a strong away performance for Southampton, who have now gone six games unbeaten in the Barclays Premier League and eight in all competitions.

Rickie Lambert could have scored twice inside the first seven minutes, Jay Rodriguez hit the crossbar with the best of several decent efforts and Adam Lallana was a constant menace in midfield.

Jack Cork also struck the woodwork late on as Saints failed to make the margin comfortable but Pochettino was content with their efforts.

“I think we fully deserved the victory,” he said. “It was a tough pitch and tough opponents but we were fully superior to a Hull team who invested quite a bit in the transfer window.

“We always had the hope we would score, we showed patience looking for the goal and in the end we achieved it.

“In the end we fully deserved the goal and the three points.”

Hull put up more of a fight than in the 4-1 defeat at St Mary’s earlier in the season but would have been fortunate to escape with a point.

Manager Bruce did not attempt to soften the blow of a result that left the Tigers just three points clear of the drop zone, instead accepting the outcome as a fair one.

“If we’re being honest, and we try to be, the best team on the night won. We had to be at our best and we weren’t. We surrendered possession, got the ball back to front far too quickly but sometimes you have to say ‘hats off’ to the opposition. They were all over us and didn’t let us play.”