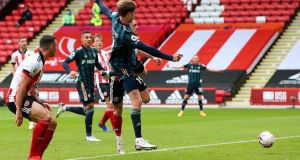 Assumptions can be dangerous things. Just ask Patrick Bamford. So few pundits thought the Leeds striker was capable of scoring goals at Premier League level that most expressed astonishment when Marcelo Bielsa retained faith in a forward whose goal return has not always matched the quality of his movement.

Three games into a season in which Bamford has already scored three times, such opinions are undergoing rapid revision to the extent that his 88th-minute headed winner in the first Premier League meeting between these teams for 26 years prompted – still slightly fanciful – suggestions he should earn an England call-up.

It left Leeds with two league victories since returning to the top tier but Sheffield United still waiting for their first point – and inaugural goal of the new season.

The Blades’ disappointing opening to the campaign had been exacerbated by Sunday’s news that Jack O’Connell, such a success as one of Chris Wilder’s opponent-confounding overlapping centre-halves last season, needs knee surgery and is expected to be sidelined until next autumn.

Indeed, with John Egan, their central, anchoring defender, suspended, there

They experienced something of a baptism of fire as Leeds kicked off at ferociously high tempo with Bielsa’s players interchanging positions with bewildering rapidity. If the watching Gareth Southgate enjoyed assessing the extent to which Kalvin Phillips shaped the contest in midfield, Wilder’s technical area body language looked distinctly tense, agitated even.

This sense of urgency perhaps began transmitting itself to a team who appear to have struggled more than most without the stimulus previously afforded by the Bramall Lane crowd. Although Leeds continued to monopolise possession while shifting, apparently seamlessly, between a back three and a back four, Sheffield United gradually began showing glimmers of last season’s adrenaline-fuelled swagger, leaving Phillips and co occasionally unable to second guess some sharp one- and two-touch passing sequences.

One particularly slick move prefaced a superb reflex save by Illan Meslier. Bielsa’s 20-year-old French goalkeeper had conceded seven goals in his previous two Premier League games but he reacted impeccably to tip John Lundstram’s eight-yard shot round a post after Ben Osborn’s cross had been flicked on by David McGoldrick as Lundstram made a late dash into the box.

It remains early days but it bore all the hallmarks of a potential save of the season with the look of disbelief on Wilder’s face speaking volumes. Despite much impressive approach play from Leeds, their generally underwhelming final balls ensured Aaron Ramsdale had not been over-extended but he, too, showed off his reflexes courtesy of a brilliant save from Stuart Dallas in the wake of Jack Harrison’s defence-bisecting pass.

Not to be upstaged, Meslier was soon called to arms once before, doing well to deny George Baldock after the right wing-back turned Harrison before lashing the ball towards the top corner.

If Meslier had more than vindicated Bielsa’s faith, Robin Koch was quietly impressing at centre-half, making some important blocks and interceptions as he demonstrated precisely why Leeds paid Freiburg £13m for his stabilising services this summer.

The second half began with Ramsdale repelling Helder Costa’s volley before denying Bamford. By now Leeds’ initial intensity had long since morphed into a slightly more cagey gameplan with Phillips surely catching Southgate’s eye as he conjured the majority of their better moves.

Bielsa’s side might have taken the lead after Dallas rounded Ramsdale but his right-foot shot lacked power and Chris Basham was able to extend his own right boot and clear off the line.

Meslier continued to impress, diving bravely at the feet of Baldock, taking a hefty kick in the chest as the players collided and the right wing-back looked fortunate to escape a second yellow card following an unnecessary challenge on the keeper occasioned by his heavy touch.

Things subsequently proved much cleaner and more clinical at the other end where a swivel and pass from Rodgrigo, on as a substitute, and Harrison’s curling cross resulted in Bamford finally heading the winner beyond a wrong-footed Ramsdale’s reach. - Guardian