The Contenders: Who is in line to take over at Manchester United? 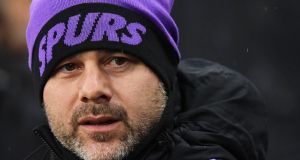 Mauricio Pochettino is one of the leading contenders to take over from José Mourinho at Manchester United. Photograph: Neil Hall/EPA

Pochettino is highly regarded at Old Trafford after his superb work at Southampton and Tottenham. The former Espanyol and Paris St-Germain defender joined Spurs in 2014 and has finished fifth, third, second and third in his four seasons in charge, bettering United’s league position in two of those seasons despite operating on a much smaller budget.

The former France international is currently out of work after leaving Real Madrid last summer following the victory over Liverpool in the Champions League final. Remarkably, that was his third triumph in the competition in only two and a half years in charge. Is unlikely to join a club until next summer, which could suit United.

The 41-year-old has impressed in his two spells at Bournemouth, taking the club into the Premier League during the second one and establishing them in the top division. His attack-minded brand of football would suit United too with an emphasis on speed and high pressing.

The Italian had a remarkable impact at Chelsea, winning the Premier League title in his first season in charge, having effectively replaced José Mourinho as the club’s manager (Guus Hiddink took over as caretaker manager in 2015-16). Chelsea also reached the FA Cup final in 2017, but they lost to Arsenal and Conte’s relationship with the players deteriorated during this second season in charge. He left the club last summer with one year left on his contract and is unlikely to take a new job until the summer.

The vastly experienced Italian is currently in charge of Napoli, having taken over from Maurizio Sarri last summer. He has proven European pedigree with three Champions League titles under his belt (two with Milan and one with Real Madrid) and has experience of English football after his spell at Chelsea. His time at Bayern, however, ended prematurely and he left early during his second season in charge.

The Argentinian has been linked with many, many moves away from Atlético Madrid but he is still there, seven years after being appointed manager of the Spanish club in 2011. He has been outstandingly successful considering the fact that he has to battle against Real Madrid and Barcelona and their vastly superior finances year in and year out. He has won one La Liga, two Europa Leagues and reached two Champions League finals.

A former Manchester United defender, the Frenchman has been out of work since leaving Paris St-Germain in 2016. Had two years in charge of the France national team after being appointed in 2010 but stepped down after losing against Spain at the Euro 2012 quarter-final stage.

This opening has surely come too soon for the former United midfielder. He joined Mourinho’s coaching staff this season and has expressed a desire to become a manager but has no experience and is not in the running for the interim role United want to fill until the end of this campaign.

Took England to the World Cup semi-finals in Russia last summer, having completely reinvigorated the national team. Has showed since taking over that he is able to get the best out young players and topped a tough Nations League group before Spain and Croatia to qualify for next year’s finals.

Stepped in as caretaker at United at the end of the 2013-14 season when David Moyes was sacked in April. He won two games, drew one and lost one. He took over as Wales manager in January 2018, replacing Chris Coleman, but has had mixed results so far. He has beaten the Republic of Ireland twice but lost to Albania in a friendly in his latest game in charge. – Guardian service