Manchester United stumble to another draw at Stoke 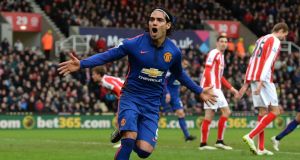 The momentum is no longer with Manchester United and they can count themselves a touch fortunate to have escaped with a point on a blustery afternoon at the Britannia Stadium. Peter Crouch, a thorn in United’s side throughout, had a strong penalty appeal turned down in the second half, when the ball clearly struck Chris Smalling on the hand, and the former England international also saw a header come back off the upright.

After six successive victories prompted talk of United joining the title race, Louis van Gaal has now endured the frustration of watching his side draw three of their last four matches. The United manager has railed against the manic Christmas schedule – the sight of Ashley Young pulling a hamstring in the second half will strengthen his argument about the fixture pile up – but the Dutchman could have no complaints about the result here.

Stoke City played with courage and belief and will feel more than a little frustrated that they failed to reprise last season’s 2-1 home victory.

Although Radamel Falcao hauled United level midway through the first half, after Ryan Shawcross had put Stoke ahead inside the first two minutes following some dreadful defending, United never did enough to break down Mark Hughes’s team thereafter. Their unbeaten run now stretches to 10 matches but two wins from their last 12 Premier League away games tells another story.

The game was only 106 seconds old when Stoke took the lead and there was no escaping the fact that it was a terrible goal for United to concede – not just because of the timing. The impressive Marko Arnautovic delivered a corner from the right that Crouch met with a free header – incredibly Luke Shaw, making his first start for six weeks, seemed to be the United player picking up the 6ft 7in striker initially – and what followed was a classic example of ball-watching from Phil Jones.

Supposedly marking Shawcross, Jones was preoccupied with the trajectory of Arnautovic’s centre and allowed the former United trainee to drift off his shoulder. Taking full advantage of the freedom that was afforded him, Shawcross volleyed home from inside the six-yard box.

Although United were controlling possession there was little by way of penetration, and had Mame Diouf showed greater composure at the other end of the pitch Stoke could easily have doubled their lead in the 19th minute.

It was another occasion when one of United’s three-man centre defence failed to cover themselves in glory; this time Jonny Evans was the guilty party. Arnautovic’s raking pass from deep inside his own half encouraged Diouf to chase what should have been a lost cause, given that Evans had at least a couple of yards’ head-start on the Senegalese. Evans, however, looked sluggish and hesitated, enabling Diouf to nick the ball and when the United defender got goalside again, his challenge was nothing like strong enough.

Diouf, through a combination of tenacity and good fortune, managed to bundle past Evans and was now bearing down on the United goal with only David de Gea to beat. It was an opportunity that called for a calm head but the Stoke forward wastefully curled wide.

There was a sense of inevitably that United would make Stoke pay for their profligacy and so it proved seven minutes later. Once again the goal came from a corner. Wayne Rooney delivered it, Michael Carrick flicked the ball on at the near post and Falcao, getting ahead of Marc Muniesa, was not going to miss from inside the six-yard box. Once the dead-ball specialists in the top flight, Stoke are now the weakest link in that department.

Falcao’s goal was the 11th that Hughes’s side have conceded from set-pieces this season, more than any other Premier League club.

Stoke, however, were proving to be awkward opponents for United, in particular in the second half when the home team had a strong wind behind them and started to crank up the pressure. Jones came close to heading a dangerous cross from Jon Walters into his own net and seconds later came that penalty appeal, when Smalling blocked Crouch’s header with his left hand. The Stoke players, as well as Hughes, were furious that Michael Oliver, the referee, refused to point to the spot.

Van Gaal had replaced Falcao with Ander Herrera and Shaw with Adnan Januzaj by that stage but United’s threat remained sporadic. Van Persie, a peripheral figure in the first half in particular, had a couple of sights of goal, but the Dutchman was unable to hit the target with an instinctive volley, from Juan Mata’s clever pass, and a near post effort from Januzaj’s low centre went wide.

Stoke had gone much closer to scoring again moments earlier. Crouch’s glancing header from Arnautovic’s free-kick, after Smalling was beaten in the air, looked like it was going to sneak in the corner but instead came back off the upright. Then Diouf thumped a volley from just inside the area that may well have caused De Gea a problem had it not taken a deflection off Smalling.