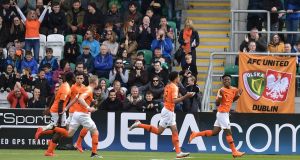 Netherlands striker Sontje Hansen celebrates after scoring during the 2019 Uefa U17 European Championship final against Italy at Tallaght Stadium on May 19th, 2019 in Tallaght. Photograph: Charles McQuillan/Getty Images

Manchester City are scouting Sontje Hansen, the 17-year-old Ajax forward who was the Golden Boot winner at last year’s Under-17 World Cup in Brazil.

Hansen’s contract expires in the summer of 2021 and the Dutch youth international would cost in the region of £6 million (€6.8 million), a relative bargain for City given his talent and potential. Hansen has played twice for Ajax, making his Eredivisie debut with a 15-minute substitute appearance in December’s 6-1 defeat of Den Haag.

In Brazil, Hansen scored six times for the Netherlands in seven matches, a return that included a hat-trick in the last-16 win over Nigeria. He was moved to number 9 after playing on the wing earlier in the tournament, where the Dutch finished fourth. Hansen drew praise from Antoine Griezmann, the Barcelona forward, who privately messaged him to offer encouragement.

Hansen indicated a growing maturity when discussing the change of position in Brazil after failing to score in the Netherlands’ opening two matches. “I started the tournament on the right wing and it didn’t really work. I ended up getting taken off in our second match. Then I got a second chance, against USA, this time at centre-forward,” he told fifa.com.

“I’m doing what I’ve been asked to do. It’s a centre-forward’s job to score goals. I’ve done that and it’s helped the team. I’m scoring goals because they’re putting me in the right positions.”

Hansen’s clever, pacy style and an ability to operate wide and centrally fits the mould Pep Guardiola likes his attackers to have. City’s manager is conscious that Sergio Agüero, the club’s record goalscorer, could leave when his contract expires at the end of next season.

While Gabriel Jesus is still considered Agüero’s long-term successor, Guardiola is conscious of the need to bolster his forward ranks, with Leroy Sané’s future also undecided. Bayern Munich have been repeatedly linked with the German winger, having voiced their interest in him last summer.

City have scouted Hansen several times. In addition to the Under-17 World Cup in Brazil and several Uefa Youth League games, Hansen was watched during the Netherlands’ triumphant European Under-17 Championship campaign in Ireland last summer. He scored in the 4-2 final win over Italy and was voted into Uefa’s team of the tournament.

Hansen is also attracting interest in Italy, where Internazionale, Milan and Juventus are monitoring him, while the Bundesliga side RB Leipzig also retain an interest.

1 Born to ride, born to win: Sam Bennett, the making of a green machine
2 Keith Duggan: Surreal story of John Delaney needs to act as a wake-up call for FAI
3 Next stop the Champs-Elysées in green for Sam Bennett
4 Saracens’ emphatic opening salvo enough to keep Leinster at bay
5 Lance Armstrong’s latest move serving him well on many fronts
Real news has value SUBSCRIBE