‘Some of the boys are obsessed with me, some of them have a problem with compulsive lies’ 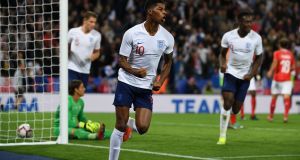 José Mourinho has defended his use of Marcus Rashford, with Manchester United’s manager reading from a prepared sheet of statistics regarding the forward’s appearances since he took over in summer 2016.

Rashford scored two in two games for England during the international break but it was suggested by some pundits that the 20-year-old may have to leave United to further his development. Rashford is unavailable for Saturday’s game at Watford because he starts a three-game suspension

Mourinho joked about this when defending his deployment of the player. “Speaking about Marcus, I think I can expect that Sunday I’m going to be highly criticised for not playing him,” he said. “Because some of the [MEDIA]boys are really obsessed with me. Some of them, they have a problem with some compulsive lies, so I can expect that Sunday some of them they will wake up in the morning and as always the first thing they think is José Mourinho.

“But it is not my fault, he’s suspended, so probably you should remind them that he is suspended and cannot play. Performances with England, of course I’m happy, he played well, he competed well, he scored and especially in a period where he comes with some sadness after his suspension it was very good that he did that.”

Mourinho then read from the sheet. “On the season 16-17 Marcus Rashford played 32 Premier League matches, 11 Europa League matches, including the final, three FA Cup matches, six League Cup matches including the final and the Community Shield. He had 53 appearances but if you want to take to the minutes of play, he played 3,068 and if you want to divide that by 90 minutes of the matches, he played 34.2 matches of 90 minutes.

“In 17-18, he played 35 Premier League matches, eight in Champions League, five in FA Cup including the final, three League Cup matches and the European Super Cup final. He played a total of 52 matches with 2,676 minutes, if you divide that by 90, it gives 29.7 matches, so with me, in two seasons, he had 105 appearances, 5,744 minutes, 63.7 matches of 90 minutes, including five finals, so the people that is speaking about these minutes, I think they are a bit confused.”

Mourinho pointed to young players at Liverpool, Chelsea and Everton as a comparison. “Marcus Rashford is not Dominic Solanke, not Ruben Loftus-Cheek, not Dominic Calvert-Lewin,” he said. “He is Marcus Rashford, Manchester United player, with an incredible number of appearances and an incredible number of minutes played at the highest level in the best possible competitions.”

Mourinho also joked about falling over a barrier last Saturday at Wembley, where he watched England’s defeat by Spain. “I protect my phones, it was a good dive, no penalty,” he said. “No yellow card.”

Marouane Fellaini is a doubt for the Watford game, with Mourinho also suggesting Ander Herrera may be ruled out because of an ankle problem.