Mané and Firmino net doubles as Liverpool see off Burnley 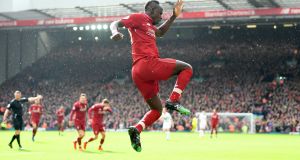 It would be too simplistic to say Liverpool responded to the test of nerve set by Manchester City. Jürgen Klopp’s team have been doing that since the first day of this enthralling season. This was a test of nerve set by Burnley, the match officials and the elements and they delivered on all counts to return the gap in the title race to one marginal point.

Liverpool fell behind to a controversial early goal but ultimately run out comfortable victors thanks to a brace apiece from Roberto Firmino and Sadio Mané. They were also indebted to consistently poor defending from Sean Dyche’s visitors who remain too close to the relegation zone for their own liking despite causing the title contenders problems all afternoon at a wet and windy Anfield.

The challenge for Klopp’s men began before Anfield had properly roused itself for the noon kick off. Joel Matip, uncertain all afternoon, conceded a cheap early corner with a wayward header under minimal pressure. Ashley Westwood swung the resulting set-piece into a packed six-yard area and directly into the far corner of Liverpool’s net. The small pocket of Burnley supporters erupted and so did Alisson, who had been sandwiched between Jack Cork and James Tarkowski as the ball entered his domain and unable to leap with a six foot one inch defender on his back. Liverpool waited for referee Andre Marriner to penalise a clear foul. He pointed to the centre circle instead, sending the Brazilian goalkeeper apoplectic and into the notebook for dissent.

It was a bad and potentially loaded call against Klopp’s team though it gave them a minimum of 84 minutes to channel their grievance in the most appropriate way. Burnley helped them along the way with several defensive lapses that squandered the major decision in their favour. Tom Heaton was the chief culprit on an afternoon to forget for the England international.

Liverpool levelled when the visiting keeper failed to intercept Mohamed Salah’s low cross from the by-line, flapping at the ball and diverting it away from Tarkowski with the defender primed to clear. Firmino gratefully converted the gift at close range for his tenth Premier League goal of the campaign. The hosts, commanding from the moment they fell behind, benefited from another error to edge ahead. Jeff Hendrick was the guilty party this time with a weak touch on an Ashley Barnes’s header that played Phil Bardsley into trouble on the edge of his penalty area. Adam Lallana launched himself into the full back’s clearance, diverting it to Salah inside the box. Tarkowski reacted with a sharp challenge but the ball broke for Mané who curled an emphatic finish inside Heaton’s far post to overturn Burnley’s controversial advantage.

Lallana’s inclusion ahead of Xherdan Shaqiri and Naby Keïta was met with heavy scepticism before kick off yet he provided the creativity and bite that Liverpool’s midfield has lacked in recent away fixtures. It was Lallana’s cross-field ball to Salah that enabled the Egypt international to exchange passes with Georginio Wijnaldum before crossing for Firmino’s equaliser. His challenge on Bardsley proved a key moment.

The wind, yes that again, was an added complication for both sides on wild Merseyside day of sun, blizzards and gales in the course of 90 minutes. One raking pass from Virgil van Dijk appeared destined for touch only to blow back into the path of Salah with Charlie Taylor bewildered. Salah was prominent but again without reward in front of goal, failing to score for the fifth consecutive game. A first in his Liverpool career. Heaton made sure that mini-drought continued with a fine save from Salah’s first time flick late on.

By then Liverpool had the cushion of a third goal courtesy of another mistake from the Burnley keeper. A weak goal kick by Heaton, perhaps caught up in the wind, sailed straight to Salah who raced through on goal only to be halted by Taylor’s precise tackle. The left back could only steer the ball into Firmino’s path who prodded home his second gift-wrapped invitation of the game.

Burnley made a fight of the contest throughout with Dwight McNeil enjoying a fine, polished game on the left of midfield. Barnes was a consistent thorn too and the visitors set up what may have been a nervous finale when Johann Berg Gudmundsson converted a pass from fellow substitute Matej Vydra from close range. Burnley’s hopes of a dramatic recovery were dashed within seconds. Liverpool sub Daniel Sturridge, possibly offside, released Mané through an open visiting defence and the Senegal striker rounded Heaton to seal a hard-fought but invaluable victory. – Guardian