Long road ahead but full recovery likely for Ryan Mason 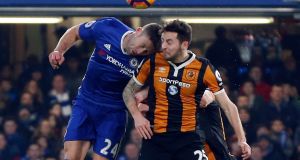 The early indications are that Ryan Mason is set to make a full recovery from his fractured skull and should be back in Hull City’s first team by the start of next season.

There is quiet confidence at the KCom Stadium that the injury he sustained in a collision with Chelsea’s Gary Cahill during Sunday’s game at Stamford Bridge is likely to have a significantly lesser impact on his career than a serious knee, ankle or hip problem might.

Yet if the first stretch of his road back to the pitch involved the drama of emergency surgery in the trauma unit of a west London hospital on Sunday evening, the second phase will almost certainly be rather mundane.

After spending the next few days being monitored in hospital, undergoing regular scans to ensure no brain bleeds have developed, a sabbatical from television, social media, mobile phones, internet surfing and reading beckons for the 25-year-old midfielder.

“Ryan Mason would be expected to follow a gradual return to play protocol and the first step is complete rest, which means no stimulation,” said Dr Michael Grey, a reader in rehabilitation neuroscience at the University of East Anglia who specialises in concussion and sports-related head injuries.

“Then, after complete rest, comes gentle exercise, all with continuous monitoring to check there are no symptoms, no fatigue or dizziness or headaches.”

Without knowledge of the specifics of Mason’s injury it is impossible to offer a precise prognosis. But the fact he was in the operating theatre for a relatively short time and able to talk to his team-mate Michael Dawson, along with Hull’s club secretary and medical staff when they visited him on Monday morning, is enormously encouraging.

Skull fractures come in assorted forms but operations are required when bone presses on the fracture, fragments break loose or a bleed occurs.

“The fracture’s not really the problem,” Grey said. “Bones knit – the big issue is damage to the brain tissue and making sure that’s properly healed. But once recovery’s complete, heading balls should be fine.”

An office worker might roughly be expected to be back to normal and working full-time three months after a similar injury but, depending on severity, six to nine months is more realistic for a return to sport.

“The difficulty is that, with head injuries, footballers often feel absolutely fine fairly quickly and want to do too much too soon,” Grey said. “Often, the biggest problem is reining them back.”

In his experience, top sportspeople rarely lose their nerve in the wake of such traumas.

“Right now Ryan Mason probably doesn’t fancy heading a football. But for most athletes these things are quickly forgotten.”

A few require psychological help but the bigger problem is a culture whereby players detest betraying weakness and coaches demand complete commitment. This desire to “man up” and get on with it is particularly dangerous in the cases of less obvious head injuries than Mason’s and has prompted the English Football Association to introduce their concussion guidelines, which advocate no return to action for at least 14 days after suffering a concussion, however mild.

“Because humans have something called ‘neural protection’, where they often feel initially fine after a head injury, medical staff have to be very strong,” Grey said. “Awareness has risen considerably in the past five years but areas like Sunday League and, particularly, children’s football can still be vulnerable.”

In today’s climate Iain Hume, who is playing in India, would have been admitted to hospital in 2008 immediately after the then Barnsley forward’s skull was fractured by the elbow of Sheffield United’s Chris Morgan. Instead he collapsed the next day with his life in danger, and was sidelined for nine months.

In 1996 Don Goodman returned to action for Wolverhampton Wanderers after a similar injury.

“I flung myself at a ball I was never going to get and smashed into the full-back’s head,” the former striker has said. “There was a big hole in my head. It was a depressed skull fracture.

“I was paralysed down my right side because the skull was pressing onto the left side of my brain. It was six months out, but no after-effects. The operation involved drilling four holes into my skull and lifting it back into shape. The surgeon was amazing and reassured me that, in time, the skull would be stronger than before.”

As he rests in a darkened room, Mason has reason to sense sunshine on the far horizon. Guardian service