Liverpool reveal plan to increase Anfield’s capacity to beyond 60,000 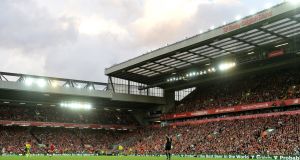 Liverpool have confirmed they are to abandon current plans to redevelop Anfield in favour of a more ambitious scheme that will increase the stadium’s capacity beyond 60,000.

Under the existing planning application, submitted as part of the redevelopment of the Main Stand at Anfield, Liverpool can add an extra 4,000 seats to the Anfield Road end, raising overall capacity from 54,074 to more than 58,000. Outline planning permission for that project is due to expire next month.

With demand for tickets to see Jürgen Klopp’s European champions far exceeding supply, Liverpool will allow the planning permission to lapse in September as they work on alternative designs for the Anfield Road end. A planning application for a larger redevelopment will be submitted to Liverpool city council in due course.

Andy Hughes, Liverpool’s chief operating officer, said: “The progress that has been made during ongoing feasibility studies has resulted in us being in a position to allow the outline planning permission to lapse.

“We are committed to working with local residents, planning officials and others as we now focus on the detail behind any proposed redevelopment for Anfield Road. Throughout this process we have been clear that our objective is to find the best possible solution for Anfield Road and that remains the case.”

Liverpool’s new Main Stand was opened in 2016 following a lengthy and controversial process that angered many Anfield residents. It was funded by a £100 million (€110 million) loan from FSG and, as well as increasing capacity by 9,000 seats, has had a significant impact on Liverpool’s corporate and matchday revenue. In a statement confirming Thursday’s decision, the club said it was “committed to engaging with the local community and other key stakeholders while pursuing a vision in keeping with the club’s aspirations”.

The Anfield area is continuing to undergo much-needed regeneration and Liverpool will have to overcome transport infrastructure concerns with a planning application for a new and bigger Anfield Road end.

Meanwhile, Liverpool have announced that midfielder Alex Oxlade-Chamberlain has signed a contract extension after fighting his way back to fitness.

The 26-year-old, who made just two appearances last season after being sidelined with a serious knee injury, has agreed a deal which will take him up to 2023. Oxlade-Chamberlain, who moved to Anfield from Arsenal in the summer of 2017 for £35 million (€38.7 million), has already made more appearances this campaign than he did in the whole of the previous one.