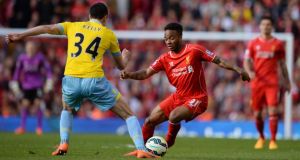 Liverpool’s Raheem Sterling in action against Crystal Palace at Anfield stadium last Saturday. The former Liverpool winger John Barnes has given a damning verdict on Sterling’s stand-off with the club. Photograph: Getty Images

Liverpool’s owner, Fenway Sports Group, wants an end-of-season review with Brendan Rodgers over the club’s failure to qualify for the Champions League and is prepared to hold Raheem Sterling to his contract despite the player’s desire to leave Anfield.

FSG is to conduct a thorough investigation into Liverpool’s poor campaign, with everything from the club’s transfer committee to team selections up for review. Rodgers has been asked to give his findings at a meeting to be held after the final game of the season at Stoke City on Sunday. There is no suggestion the manager’s position is under immediate threat but the investigation into Liverpool’s season, plus the extent of it, underlines the owner’s dissatisfaction with what has unfolded.

Tom Werner, the Liverpool chairman, and John W Henry, the principal owner, accepted last summer the £75 million sale of Luis Suarez to Barcelona would have on impact on Rodgers’ team and their prospects of a second successive challenge for the Premier League title.

They also appreciate the effect Daniel Sturridge’s dreadful run of injuries has had on a side that scored 101 league goals last season but only 51 this term. However, having spent £117 million (€162 million) on nine players last summer, the Boston-based owners believed Liverpool were equipped to qualify for the Champions League once again.

There is concern not only at the modest impact of the new recruits but the miserable end to the season, which has yielded only eight points from the last 24 available and also included a lame FA Cup semi-final defeat by Aston Villa.

The absence of Champions League football at Anfield – for the fifth time in the last six seasons – is also believed to be a factor in Sterling’s determination to leave the club this summer, an intention he and his representative, Aidy Ward, are expected to confirm on Friday when they meet Liverpool’s chief executive, Ian Ayre.

Manchester City are monitoring developments, although Ward has claimed the latest furore over his client’s future has been exaggerated. “The story has been blown somewhat out of proportion,” said the agent in a statement. “Raheem and his representatives have a meeting scheduled with Liverpool later this week and we will take proceedings from there.”

Nevertheless, FSG is willing to take the same hardline stance it adopted with Suarez in 2013 should Sterling refuse to sign a contract extension and keep the winger on his current £35,000-a-week deal. Sterling is under contract at Liverpool until 2017 and the club’s owners are prepared to retain the player on his existing terms until next summer – costing him more than £3 million in lost wages given his rejection of a £100,000-a-week contract – should the impasse continue.

The former Liverpool winger John Barnes has given a damning verdict on Sterling’s stand-off with the club, claiming he could become the next Scott Sinclair should he succeed in moving to Manchester City. “Liverpool gave him an opportunity and he should stay,” said Barnes. “He has not achieved anything, he has not won anything. Does anyone believe that if he goes to Manchester City he will be the first name on the team-sheet or are they just signing him because they need English players? We have seen it with players in the past like Scott Sinclair.”

Meanwhile, the news that will have struck with force in Boston – and might, just might, prompt FSG to revise the strategy they have pursued at Liverpool since acquiring the club at the High Court in October 2010, is Michel Platini’s announced Uefa is easing its rules on Financial Fair Play (FFP).

“We wouldn’t have moved forward on Liverpool except for the passage of FFP,” John W Henry, Fenway’s principal owner, told the Guardian 12 months after the fraught takeover from the almost ruinous ownership of Tom Hicks and George Gillett. Since then, Fenway have operated in line with Platini’s ideals while bemoaning the loopholes within FFP that other clubs have exploited.

Buying or developing young players with rich potential is also fundamental to the strategy as Fenway, three years into the process with Rodgers as manager, play the long game to keep up with the Joneses at Chelsea, Manchester City, Arsenal and Manchester United.

That strategy looks fundamentally flawed , when a player who, Rodgers claims, has the potential to be world-class wants out at the age of 20. Guardian Service