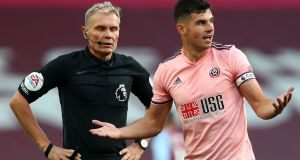 Ireland defender John Egan is set to return to the Sheffield United defence against Arsenal on Sunday after serving a one-match suspension. Photograph: Clive Rose/AFP via Getty Images

Chelsea (9) v Crystal Palace (6), 12.30pm – Live BT Sport 1
Christian Pulisic will be in Chelsea’s squad for the first time this season when the Blues host Crystal Palace in Saturday’s Premier League clash. The USA forward has taken the coveted number 10 shirt at Stamford Bridge, and is finally shaking off a niggling hamstring issue, but is not fit enough to start. Hakim Ziyech will not be ready to feature this weekend, with the Morocco star still just edging past a knee complaint.

Crystal Palace will be without loan striker Michy Batshuayi for the trip to Stamford Bridge with the Belgian ineligible to face his parent club. The Eagles have been boosted this week by Gary Cahill, James Tomkins and Patrick Van Aanholt all being able to take part in training after lengthy spells on the sidelines, but they are still short of match fitness. Scott Dann could return for Palace against Chelsea, but Jeffrey Schlupp is still absent with a muscle strain along with Nathan Ferguson (knee).

Everton (3) v Brighton (12), 3pm – Live BT Sport 1
Everton will be without defender Jonjoe Kenny and midfielders Allan and Andre Gomes for the visit of Brighton. Kenny injured an ankle in the Carabao Cup win over West Ham and is out for at least four weeks, while a groin problem in the same game rules out Allan until after the international break. Gomes is nursing a minor knock, striker Moise Kean is ill and Richarlison faces a late fitness test on an ankle problem, with Everton still missing defenders Mason Holgate and Jarrad Branthwaite and midfielder Jean-Philippe Gbamin.

Brighton will have midfielder Yves Bissouma back for the trip to Goodison Park after he completed a three-match suspension. The Mali international was sent off during the 3-0 win at Newcastle last month, but has served his ban and could start against Everton. Ali Jahanbakhsh is a doubt after he sustained a hamstring injury during the Carabao Cup tie with Manchester United on Wednesday and he will join Christian Walton (ankle), Jose Izquierdo (knee), Davy Propper (Achilles) and Florin Andone (knee) on the sidelines.

Leeds United (7) v Manchester City (13), 5.30pm – Live Sky Sports
Leeds will be without on-loan winger Jack Harrison as they host Manchester City on Saturday. Harrison is ineligible to face his parent club so Ezgjan Alioski could make his first Premier League start in his absence. Recent signing Diego Llorente is likely to be included in the squad but midfielder Pablo Hernandez (groin) is still unavailable and midfielder Adam Forshaw is out long term after a setback in his return from a hip problem.

City could hand a debut to new £62 million centre back Ruben Dias, who joined the club from Benfica this week. Strikers Sergio Agüero and Gabriel Jesus remain sidelined while defenders Joao Cancelo and Oleksandr Zinchenko are also out and John Stones is a doubt. Midfielder Ilkay Gundogan is back in training after his positive Covid-19 test but the German will not be involved this weekend.

Newcastle (10) v Burnley (18), 8pm – Live Sky Sports
Newcastle striker Allan Saint-Maximin could return to the squad for Saturday evening’s Premier League clash with Burnley. The Frenchman has sat out the last three games with an ankle injury, but has returned to training and is expected to be available, although Jamaal Lascelles (hamstring) and Emil Krafth (hip) are both doubts. Fellow defender Fabian Schar is available after being used as a substitute in the Carabao Cup victory at Newport in midweek following his return from a shoulder problem, but keeper Martin Dubravka (ankle), defenders Paul Dummett (tendon) and Ciaran Clark (thigh), midfielders Matt Ritchie (shoulder surgery) and Matty Longstaff (thigh) and striker Dwight Gayle (knee) are still sidelined.

Burnley are without Matthew Lowton after the full back suffered an ankle injury in a Raheem Sterling challenge during the Carabao Cup defeat to Manchester City on Wednesday. James Tarkowski should make his first league start of the season after a toe injury and Ashley Barnes is in contention after ending a nine-month absence against City following hernia surgery. Robbie Brady (ribs) and Johann Berg Gudmundsson (knee) could come back into the reckoning, but Jay Rodriguez (ankle), Ben Mee (thigh) and Jack Cork (ankle) remain out.

Leicester (1) v West Ham (11), 12.0pm – Live BT Sport 1
New Leicester signing Wesley Fofana is waiting for international clearance to be available to face West Ham. The defender joined from St Etienne on Friday but should he not be available Jonny Evans has shaken off a tight calf. Roma loanee Cengiz Under is available with Jamie Vardy (hip) fit although Dennis Praet (knee) is unlikely to feature and Ricardo Pereira is still recovering from a long-term Achilles injury.

West Ham could hand a debut to new signing Vladimir Coufal after his arrival from from Slavia Prague. Coufal is in contention to replace Ryan Fredericks, who has a hamstring injury, at right back. Issa Diop and Josh Cullen have returned to training after self-isolating for 10 days following positive coronavirus tests.

The game could see a West Brom league debut for 36-year-old full back Branislav Ivanovic, who has been building his fitness. Conor Gallagher is available again after being ineligible for last weekend’s 3-3 draw with his parent club Chelsea, and Filip Krovinovic could also come into the matchday squad having rejoined this week on another season-long loan from Benfica. Kieran Gibbs remains suspended following his red card in the 5-2 loss at Everton on September 19.

Arsenal (5) v Sheffield United (19), 2.0pm – Live Sky Sports Main Event
Arsenal have no fresh injury concerns ahead of Sunday’s Premier League visit of Sheffield United. The Gunners are likely to welcome back a number of players who were rested for the Carabao Cup penalty shoot-out win at Liverpool on Thursday, with the likes of Pierre-Emerick Aubameyang, Willian and David Luiz in contention. Sokratis Papastathopoulos (calf) Pablo Mari (ankle), Shkodran Mustafi (hamstring), Emile Smith Rowe (shoulder), Calum Chambers and Gabriel Martinelli (both knee) are all still missing.

The Blades have John Egan available again after he served a one-match ban against Leeds and the defender is likely to go straight back into manager Chris Wilder’s starting line-up. The Yorkshire club are set to sign Rhian Brewster from Liverpool but it remains to be seen if the deal will be done in time for the striker to be involved at the Emirates Stadium. Jack O’Connell underwent knee surgery this week. Wilder confirmed there were “no complications” with the operation but the defender will be out for around six months.

Wolves (16) v Fulham (20), 2pm – Live Sky Sports Premier League
Wolves hope to have Daniel Podence back for this weekend’s Premier League game against Fulham at Molineux. The Portuguese attacker missed the 4-0 defeat at West Ham due to a shoulder problem. Marcal was also absent against the Hammers after suffering a calf injury on his debut against Manchester City on September 21st and the left back will be assessed.

Fulham still have doubts over Mario Lemina and Harrison Reed. Both men have missed the last three games with injuries picked up in the defeat at Leeds. Kenny Tete is still struggling with an injury while Ademola Lookman is hoping to make his debut following his loan move from RB Leipzig.

Tottenham have doubts over Son Heung-min and Giovani Lo Celso. Son has a hamstring injury picked up last week and boss Jose Mourinho has refused to rule him out while Lo Celso came off at half-time of Thursday’s win over Maccabi Haifa with a knock. Gareth Bale (knee) is still on the comeback trail so will not feature at Old Trafford.

Aston Villa (4) v Liverpool (2), 7.15pm – Live Sky Sports
Ross Barkley could make his Aston Villa debut after joining on loan from Chelsea. The midfielder was cup tied for their 1-0 Carabao Cup exit to Stoke on Thursday. Jack Grealish should shake off a dead leg while Kortney Hause will be assessed after limping off against Stoke. Orjan Nyland has a back problem with Bjorn Engles (thigh) and Wesley and Tom Heaton (both knee) out.

Liverpool captain Jordan Henderson could be in contention for a return having missed the last three matches with a knee injury. Defender Joel Matip remains sidelined until after the international break, as does midfielder Alex Oxlade-Chamberlain (knee), Thiago Alcantara (coronavirus), and Kostas Tsimikas (thigh). Manager Jürgen Klopp is like to restore his full-strength side having made nine changes for the Carabao Cup defeat to Arsenal, but there will not be a place in the squad for Xherdan Shaqiri who is attracting interest from clubs ahead of Monday’s transfer deadline.