Liverpool go back on top with comfortable Cardiff win 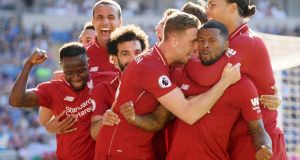 There is a relentlessness about this title race that is impossible not to admire. Liverpool, playing catch up after Manchester City’s victory 24 hours earlier, once again did everything that was asked of them to regain top spot and leave their rivals with no margin for error ahead of Wednesday’s derby at Old Trafford.

Frustrated for the best part of an hour, Jürgen Klopp’s side held their nerve and showed their class to take the game away from Cardiff with a couple of second-half goals. Georginio Wijnaldum scored the first, sumptuously sweeping home Trent Alexander-Arnold’s corner, and James Milner added the second via the penalty spot after Sean Morrison wrestled Mohamed Salah to the ground.

A ninth straight victory in all competitions was secured in the process and a club-record Premier League points total with three games to spare. That is a measure of the standard that Klopp and his players have set this season, although it will all feel rather hollow unless the campaign finishes with a first league title for 29 years.

As for Cardiff, this fixture always felt like a free-hit for them in their battle to avoid relegation. They have now lost all 11 matches against top six opponents this season, yet there was no disgrace in the manner of this defeat. The bigger picture shows that they will need a minimum of a win and a draw from their last three matches, which is a big ask but not impossible.

Buoyed by their midweek victory over Brighton, Cardiff made life uncomfortable for Liverpool for spells, especially in the first half. Neil Warnock’s team saw little of the ball but snapped into tackles and carried a genuine threat on the counter-attack, in particular through the pace of Nathaniel Mendez-Laing, who went past Alexander-Arnold three times in the opening 30 minutes alone. One of those raids down the Cardiff left ended with Junior Hoilett being picked out at the far post but the winger elected to take the ball down on his chest rather than head it first time, giving Andrew Robertson the chance to get across and block.

Liverpool were on top – as to be expected – but it was not quite clicking further forward. When Salah and Sadio Mané did combine perfectly midway through the first half to carve out a wonderful chance for Roberto Firmino, the Brazilian profligately lifted a left-footed shot over the bar. Stood only 12 yards out and with only Neil Etheridge to beat, Firmino really should have scored.

Salah also had an opportunity of his own later in the half. Jordan Henderson, who once again took up a slightly more advanced role on the right of Liverpool’s three-man midfield, fed a low pass into Salah’s feet. Bruno Ecuele Manga, who generally did well against Salah, got too tight on this occasion and the Liverpool forward expertly rolled him. With the angle slightly against him, Salah tried to stab a left-footed shot beyond Etheridge but the Cardiff goalkeeper blocked the ball with his outstretched boot.

Although Cardiff defended in numbers, theirs was not solely a rearguard action. Mendez-Laing’s direct, penetrative running provided a valuable outlet and set-pieces had the potential to cause Liverpool problems. Cardiff nearly scored from one just before half-time when Joël Matip could only half-clear a corner, Victor Camarasa miscued his shot and the ball dropped invitingly for Oumar Niasse to hook an acrobatic volley that Alisson, instinctively and superbly, tipped over the crossbar.

With the game goalless at half-time, Liverpool cranked up the pressure immediately after the restart and that approach brought reward shortly before the hour-mark. Alexander-Arnold’s low inswinging corner from the right dropped for Wijnaldum, who could not have connected any sweeter with an unerring first-time shot from 12 yards that flashed past Etheridge.

It should have been 2-0 to Liverpool four minutes later. The industrious Naby Keïta won possession deep inside the Cardiff half, released Mane on the Liverpool left and the Senegalese intelligently and selflessly cut the ball back for Henderson. The England international did not need to break his stride but he tried to break the net and wastefully fired over. Klopp could not conceal his disappointment on the touchline.

That moment threatened to take on greater significance three minutes later. Alisson, who would later send Klopp into a panic by dropping his shoulder in the Liverpool penalty area when he had the ball at his feet, flapped at a corner and Morrison, stationed at the far post, looked certain to score. Somehow the central defender failed to get a clean contact on the ball and the chance was gone.

Liverpool needed the breathing space that a second would provide and that moment arrived after Morrison, who had both hands around Salah, conceded a penalty. Salah looked as though he wanted to take it but Milner, a second-half substitute, took responsibility and confidently dispatched his kick. Only an excellent save from Etheridge in the 89th minute denied Salah a third.