Liverpool back to what they do best as confidence returns 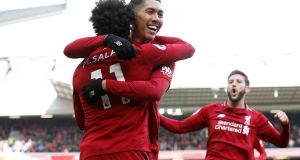 Just for a few minutes it appeared the title race might be disrupted by the ultimate set-piece ploy, the corner that finds the net without anyone getting a touch, though when Liverpool recovered to take the points they did so by demonstrating what they rather than Burnley do best.

Liverpool’s second goal in particular was a good example of the ferocious pressing Jürgen Klopp wants to see. Phil Bardsley thought he had time to make a clearance on the edge of his own area but he reckoned without Adam Lallana arriving with a block before he even had a chance to turn round. In Mohamed Salah and Sadio Mané the home side had the players in the box to take advantage, and the latter scored with a measured finish.

Restored to the starting line-up ahead of Jordan Henderson, Lallana had also played a part in Liverpool’s opening goal when his raking crossfield ball found Salah in space on the right for the Egyptian to exchange passes with Georginio Wijnaldum and reach the by-line at the sort of speed that can only induce defensive panic. Tom Heaton and James Tarkowski impeded each other as they tried to prevent the ball fizzing across the face of goal, succeeding only in slowing it down to leave Roberto Firmino an easy tap-in.

That meant all of Liverpool’s front three had either scored or been involved in goals inside the first half hour, which was the sort of response Klopp was looking for after the draws that had allowed Manchester City to regain the Premier League leadership.

It would be overstating the case to imply Liverpool were back to the rampaging heights of last season, or even the five-goal demolition of Watford on this ground two weeks ago, but Heaton picked the wrong player in red to find with his errant goal kick in the second half. All of a sudden Salah was running down the wing as of yore, and though when he entered the area he hesitated long enough for Charlie Taylor to catch him, it was a simple matter for Firmino to tuck away the loose ball.

There were times in the game when it was almost too easy for Liverpool, with Virgil van Dijk spending most of the first half advancing to the halfway line, then playing diagonal balls to Salah on the right that inevitably put Taylor and the rest of the Burnley defence under pressure. What works against them will not necessarily pay off against Bayern Munich, however, and when Liverpool face up in Germany in the Champions League on Wednesday they can expect to find less space to run into.

That said, by the time they were two goals in front Liverpool were probably playing with one eye on the next game, and even on economy setting they still might have had a couple more goals by the end. Mané somehow managed to hit the bar from a couple of feet out after Trent Alexander-Arnold’s sumptuous cross found him right in front of goal, and when the same player teed up Andy Robertson for a thunderous drive a couple of minutes later it took a brave block by Bardsley to stop a goalbound effort.

Those missed opportunities almost came back to haunt Liverpool when Burnley scored their late second goal, producing a nervy last few minutes that would have made interesting viewing in Munich and Manchester, and if the visitors had scored any more the finger would almost certainly have been pointed at Salah for miscontrolling an inch-perfect pass from Henderson that would have put him clear on goal.

It was the sort of opening Salah would have accepted in his sleep last season, but right now either his touch, his decision-making or his finishing always seems slightly awry. Fortunately from the point of view of anyone who wants to see the title race go on as long as possible, Liverpool possess other attacking alternatives. Daniel Sturridge only came on for a short cameo, but he still produced an inspired pass to allow Mané to score his second, as Burnley paid the penalty for pushing too many men forward in search of a stoppage time equaliser.

They say that points are all that matter at this stage of the season but confidence is also important. Had Mané looked up and seen Salah shouting for the ball at the end, each of Liverpool’s front three might have made it on to the scoresheet, which would have made a statement, though a couple of goals each for Firmino and Mané with Salah involved in three is not exactly shabby. With hapless defenders Fulham up next, and City involved in the FA Cup, Liverpool could return to the top of the league on Sunday as long as they retain their nerve and their appetite.