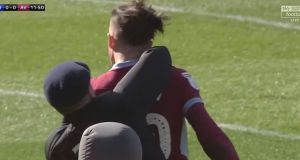 Football is facing urgent calls to improve player safety after the Aston Villa captain, Jack Grealish, was assaulted on the pitch by a spectator in the latest among a rash of troubling crowd-related incidents in recent weeks.

Grealish was punched from behind by a pitch invader, ostensibly a Birmingham City fan, in the ninth minute of the Championship derby at St Andrew’s. The assailant was arrested and Grealish, who was -uninjured, gathered himself to score the only goal of the game after half-time. But the matter is not ending end there, with Birmingham’s role in the incident coming under particular scrutiny and concerns growing about a wider trend of violence at matches across the UK.

Just under six hours later, in another episode that will raise serious questions about the measures in place to keep footballers out of danger, a supporter ran on to the Emirates Stadium pitch during Arsenal’s 2-0 win over Manchester United and shoved Chris Smalling, as the north London side celebrated their second goal.

An Arsenal spokesman said: “We condemn the behaviour of the individual who ran on to the pitch and approached Chris Smalling during today’s match. We would like to apologise to Chris and Manchester United and are pleased that [THE INTRUDER]was apprehended and arrested. We will be working closely with the police in their investigation. The individual will also be banned from Arsenal matches home and away.”

In a strongly-worded statement, Villa demanded an investigation into the chain of events that put Grealish in harm’s way. “Aston Villa football club is appalled by the disgraceful attack on Jack Grealish during today’s game,” it read. “A red line has been crossed by this cowardly on-field assault on a player, which is unprecedented in English football. We trust the perpetrator will feel the full force of the law and the authorities investigate the circumstances surrounding today’s deplorable incident.

“Local rivalries are part of the fabric of the game. However, as we are sure our friends at Birmingham City would agree, to have a player’s personal safety placed under such jeopardy is a serious cause for concern for the entire football community.”

On Sunday West Midlands police announced a 27-year-old man had been charged with invading the pitch and assaulting Grealish. A statement read: “We have this evening charged a man with invading the pitch and assaulting Aston Villa player Jack Grealish during the Second City derby. Paul Mitchell, aged 27, of Rubery, has been remanded in custody to appear before Birmingham magistrates court on Monday.”

Grealish preferred to focus on his match-winning goal and admitted to finding that moment particularly satisfying in light of what had occurred earlier. “I was just unaware at the time. I was walking into position and then just felt a whack around the side of the face,” he told Sky Sports. “Obviously there’s rivalry in football but I don’t think there’s any place for that really. I just tried to get on with my job. To score the winner was unbelievable.”

A contrite Birmingham statement confirmed that the offender will, as a minimum, be banned from their stadium for life. “We deplore the behaviour of the individual who committed this act and rest assured he will be banned from St Andrew’s for life,” it said. “The club will also support any further punishment this individual may face in the eyes of the law.”

Birmingham said the incident “has no place in football or society” and confirmed that they will review their stadium’s safety procedures. That may extend to their stewarding after television footage appeared to show a member of their matchday staff attempting to force Grealish back over an advertising hoarding as he celebrated his 67th-minute goal, and subsequently being led away by police officers.

The Football Association will investigate the spectator’s assault on Grealish after receiving the match report from Tim Robinson, the referee. Birmingham can expect to be charged, with a punishment for failing to control their supporters among the options available.

“The club are going to have to take a huge punishment for this to act as a deterrent in the future,” tweeted the former England defender Gary Neville. “A points deduction or empty stadium for 10 games!” The former Villa player Lee Hendrie added: “There’s got to be a hefty fine, possibly a points deduction.”

Offences of this gravity have little precedent in the English leagues although, in October 2012, the Sheffield Wednesday goalkeeper Chris Kirkland required medical attention after being struck by a pitch invader during a match against Leeds at Hillsborough. Aaron Cawley was sentenced to 16 weeks in jail and given a six-year football banning order, while Leeds banned him from their Elland Road ground for life.

In 2002 Michael Harper, a Birmingham fan, ran on to the St Andrew’s pitch and taunted the then Villa goalkeeper, Peter Enckelman, after his error had led to an own goal. Harper was handed a four-month jail sentence and was banned from the ground for life. The authorities are likely to ask exactly how, in view of the fixture’s reputation, a second such encroachment was able to take place.

There is deep concern that, 17 years on, violence among supporters is becoming more prevalent. A statement from the Professional Footballers’ Association called for a full inquiry and voiced unease at the proliferation of recent incidents.

“The PFA is concerned that we’ve seen elements of this type of behaviour coming back into the game, with several high-profile crowd related issues this season,” it said. “We must address issues of violence and racist chanting – this should include continued efforts with regards to education but be underpinned by strong punishments and sanctions.”

The statement made particular reference to an incident on Friday during the Scottish Premiership match between Hibernian and Rangers at Easter Road. Just before half-time the Rangers captain, James Tavernier, bent down to pick the ball up but saw it kicked from his hands by a pitch invader, who subsequently squared up to him. It followed an incident at the same venue six days previously in which a glass bottle was thrown from the stands as the Celtic winger Scott Sinclair prepared to take a corner.

Last month the Kilmarnock manager, Steve Clarke, was on the receiving end of sectarian abuse during a match at Rangers, with sections of the support chanting, “Sad Fenian b*stard”.