Leicester hold out to go seven points clear at the top 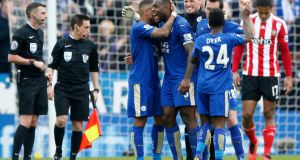 The locals were giving the opportunistic peddler selling scarves declaring “Leicester City, Premiership champions 2016” outside this arena short shrift pre-match, but belief is welling uncontrollably in these parts. The most dramatic of title wins looms ever larger, with this latest narrow success a dagger to the hearts of the chasing pack. The lead now gapes at seven points, after Tottenham Hotspur could only draw at Liverpool on Saturday. Claudio Ranieri, usually so manic in his delight on the touchline, was calmness personified at the final whistle. Even he looks as if this is all becoming routine.

Five of the last six games have now been claimed with a solitary goal and, for all that this team defend frenetically for long periods of games, they keep emerging unscathed. Wes Morgan was their match-winner here, an improbable scenario in itself, but so many of this Leicester side are surpassing expectations at present. Their collective is utterly unshakeable, their methods still flummoxing all-comers. Southampton tested them for long periods but they the home side simply would not be breached.

Just as at Crystal Palace in their previous fixture, it had actually been Leicester’s resilience that had caught the eye once their initial urgency, swarming all over their visitors at source, had petered out without reward. Southampton went on to create the better chances while the contest remained goalless but, even when individual mistakes offered rare glimpses of the leaders’ vulnerability, another of the hosts’ number summoned up a challenge, block or save to stave off the threat. Kasper Schmeichel tipped over José Fonte’s long-range attempt at full stretch, and there was enough urgency in N’Golo Kanté or Danny Drinkwater to leave Steven Davis or Jordy Clasie snatching at shots from distance.

The best opportunity actually fell to Sadio Mané, operating off Graziano Pellè and benefiting from the Italian’s turn and clever reverse pass inside Danny Simpson which sent the Senegalese sprinting into enemy territory. Schmeichel was poorly positioned this time, too advanced on the edge of his own penalty area and in retreat, with the invitation there for Mané to chip. Instead, he wriggled round the goalkeeper while Simpson overlapped on the outside desperately seeking to provide cover on the edge of the six-yard box. In the end the full-back blocked the forward’s rather panicked shot with his right elbow, albeit locked to his side, as Victor Wanyama berated his team-mate for ignoring his free run at his side. The Kenyan would have had a tap-in.

Yet it was from that period of Southampton dominance, when the jitters appeared to be setting in, that Leicester forced themselves ahead. An attacking free-kick from the flank had broken down but that feverishly energetic midfield reclaimed possession and spread the play out to Christian Fuchs on the left. The Austrian’s main threat up to then had been from long throws, but his centre was inviting, Clasie caught slightly on his toes and Morgan thumped his header down and beyond Fraser Forster. The captain’s last goal had come 11 months ago, a winner against Newcastle in that unfeasible late charge to Premier League safety. Fast forward to the present day and his contribution is closing in on the title.

The centre-half was back defending ruggedly alongside Robert Huth thereafter, as Dusan Tadic’s delivery added to the visitors’ armoury after the break, Leicester’s back-line heaving to repel the flurry of half-chances. They retained potent threat of their own on the counterattack, Fonte almost diverting Drinkwater’s pass, aimed at Jamie Vardy, into his own net only for Forster to leap and save. The England goalkeeper’s reactions were tested even more sharply moments later when Vardy surged beyond Cédric Soares on to Drinkwater’s back-heeled pass to clip to the far post. Simpson arrived unchallenged, the goal gaping, only to scuff his attempt and allow Forster the chance to make an instinctive save.

A second goal would have eased the nerves, Forster prompting another wail of frustration as he blocked from Vardy after the latest glorious Kanté burst up-field, but it mattered not. This team would not be knocked off course. The most remarkable of title challenges is maintained and four wins from their remaining six games will be enough to claim the trophy.