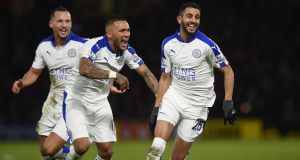 The two Dannys always dreamt of eventually proving Manchester United wrong. They had long hoped to jog a few memories by reminding the Stretford End of what might have been but neither man envisaged it happening quite like this.

When Danny Drinkwater takes up his position in central midfield and Danny Simpson stations himself at right back at Old Trafford on Sunday afternoon Leicester City will be one win away from the most startling of Premier League title triumphs.

To clinch English football’s biggest domestic prize back at the place where it all began for the pair would make things even more special.

In many ways, the two Dannys constitute a hopelessly romantic, wonderfully feelgood story but if Drinkwater’s journey since being shown the door by United more than fulfils this narrative, Simpson’s progress has been somewhat darker.

The 29-year-old made eight senior appearances for Alex Ferguson’s team but spent much of his time on the Old Trafford books farmed out on loan – to Royal Antwerp, Sunderland (where he helped Roy Keane’s side win promotion from the Championship), Ipswich Town, Blackburn Rovers and Newcastle United.

Eventually, in 2010, Simpson was transferred to Newcastle, where he played a big part in their return to the Premier League under Chris Hughton. Aware Hughton’s successor, Alan Pardew, was keen to replace him with an “upgrade”, a defender who had courted controversy by leaving Stephanie Ward, the mother of his baby daughter, for an ill-starred, volatile romance with the singer and X-Factor judge Tulisa subsequently moved on to QPR. Another promotion was followed by another transfer, this time to Leicester, and last season’s relegation fight.

A few months after the move, in January 2015, Simpson was charged with assaulting Ward. Shortly after Nigel Pearson’s then side confirmed a most unexpected relegation escape, he was convicted and sentenced to 300 hours of community service.

The judge told him he had been fortunate to escape a six-month custodial sentence for throttling his former partner and, with many Leicester fans demanding his sacking, he was forced to beg the club’s hierarchy for one last chance.

Simpson found himself spending football-free days variously steam-ironing bin-bagged clothes in a charity shop, escorting people with mental health problems to the toilet and teaching them to play bingo. “It helped me grow,” he said recently. “I was in this football bubble and community service broke that. It made me think. It humbled me. It was a massive eye-opener.”

Only time will tell if this particular leopard has truly changed his spots. Pardew, though, is delighted to see a full-back he had once regarded as a Championship level player undermined by a Jack the Lad persona, not only prospering professionally but apparently getting his life back on track.

“We released Danny from Newcastle thinking we could get something better in his position,” says Crystal Palace’s manager. “But here he is in a position to win the title, attracting admiration and envy. I take my hat off to him.”

Drinkwater, three years Simpson’s junior, was part of a Manchester United youth system that also hot-housed Matty James, another Leicester midfielder. James, something of a forgotten man after rupturing a cruciate ligament last May, was often preferred to Drinkwater in midfield by Pearson but his injury created a big opportunity for Drinkwater under Ranieri.

Drinkwater has seized it so assuredly he has even forced his way into the England squad – a feat few would have thought possible when he quit United for an uncertain future. Like Simpson he came from a modest background in the Manchester area – Altrincham to the right-back’s Eccles – grew up supporting United and, again as with Simpson, surprised teachers by obtaining nine good GCSEs.

Drinkwater’s Old Trafford class reached the 2007 FA Youth Cup final, losing on penalties to Liverpool. Of that team Danny Welbeck is at Arsenal, James Chester at West Bromwich Albion and Corry Evans with Blackburn but other squad members have drifted out of football.

“Some of the guys from that time don’t play professionally anymore,” said Drinkwater, aka Leicester’s “puppet master”, recently. “They play Sunday League and I know that could have been me. I didn’t have as good an attitude as I needed but you learn an awful lot when you see players falling out of football.

“I still speak to a few of those boys and you can sense the disappointment in them. But a lot of making a breakthrough at big clubs is down to luck.”

Underwhelmed, Drinkwater was “gutted” by United’s decision but now sees that a move which brought him to his “lowest” ebb ultimately changed and matured him. This metamorphosis did not surprise Keith Hill, his manager at Barnsley. “I always thought Danny would become a Premier League player,” says Hill, now at Rochdale. “He was superb.”

Old ties still bind the midfielder to his original habitat and he continues to take a close interest in United. “I’ve always supported them,” he said recently. “But I guess there’s a part of me that wants to prove people there wrong.”

Simpson still relishes memories of training alongside Cristiano Ronaldo, Ryan Giggs, Paul Scholes, Wayne Rooney et al. “I tried to base my game on Gary Neville’s,” he says. “United was a dream.”

Now an even bigger fantasy seems about to come true. Guardian Service