Round-up: Irish players John Egan and Anthony Pilkington among the goals for their sides 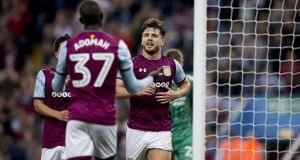 Aston Villa overcame Wigan 4-1 to reach the third round of the Carabao Cup, with Albert Adomah and Birkir Bjarnason adding to a Scott Hogan double.

Hogan finally declared for the Republic of Ireland earlier this month, and the 23-year-old was on target twice in a pulsating first period — adding to his goal in the previous round against Colchester. Ryan Colclough scored for the Latics.

Etienne Capoue sparked a dramatic second half when he fired the Hornets ahead after 47 minutes.

But teenager Freddie Hinds (59) levelled for the Sky Bet Championship side before Bobby Reid (67) grabbed his fifth goal of the season.

Watford were reduced to 10 men when Jose Holebas was sent off two minutes from time, and Niclas Eliasson added a third for City to make Adrian Mariappa’s last-gasp effort irrelevant.

The Robins’ city rivals Bristol Rovers also sprang a surprise by winning 1-0 away to Championship side Fulham, Ellis Harrison scoring the 13th-minute winner.

Leicester comfortably avoided an upset with a 4-1 victory at Sheffield United.

All the goals came in the second half with Demarai Gray producing a fine individual goal before Algeria striker Islam Slimani bagged a brace.

Colin Lavery pulled one back for the Blades, but Ahmed Musa had the final word in stoppage time.

Swansea eased through 4-1 at MK Dons, despite falling behind to Ryan Seager’s 17th-minute opener.

Leroy Fer levelled within two minutes and the Dutchman scored a second header on the hour mark.

West Brom also had a comfortable passage at Accrington, with Salomon Rondon, Matt Phillips and Jay Rodriguez on target in a 3-1 win, Tom Dallison replying late on.

James McArthur struck twice, after 76 and 84 minutes, before Bersant Celina grabbed an injury-time consolation for Ipswich.

Bournemouth fought back to win 2-1 at Birmingham after Maikel Kieftenbeld had given Harry Redknapp’s side an 11th-minute lead. Ryan Fraser (46) and Marc Pugh (68) turned it around for the Cherries.

Leeds might have feared a shock after falling behind to Newport through Joss Labadie’s long-range strike.

But Kemar Roofe bagged a hat-trick and Samu Saiz and Ronaldo Viera were also on target in a 5-1 win.

Doncaster beat weakened Hull visitors 2-0, with Alfie May and Tommy Rowe scoring within nine minutes of the re-start.

Burton avenged their defeat to Cardiff on the opening day of the Championship season with a 2-1 away win.

Middlesbrough saw off Scunthorpe 3-0 as Fabio, Lewis Baker and Ashley Fletcher all scored their first goals for the club.

Norwich and Brentford won by the same 4-1 margin, with the Canaries battling back from Lee Novak’s early Charlton goal.

Josh Murphy scored either side of half-time before Marley Watkins and Tom Trybull wrapped up victory.

Brentford were 3-0 up away to neighbours QPR in 32 minutes through an Ariel Borysiuk own goal and efforts from Cork native John Egan and Neil Maupay.

Darnell Furlong cut the deficit close to half-time, but Joshua Clarke added a fourth for the Bees.

Donald Love had earlier given the Black Cats the lead before Danny Grainger equalised after Robbin Ruiter had saved his penalty.