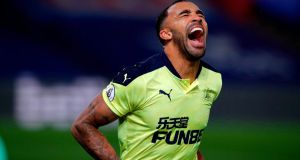 For Steve Bruce, anything would have been an improvement on his side’s last two performances.

In truth, the embattled Newcastle manager would probably have been happy to settle for a point after a turgid encounter in south London but he ended the evening beaming from ear to ear after two goals in the last two minutes from Callum Wilson and Joelinton sealed a first victory at this ground since 2013.

The Brazilian’s third Premier League goal since his £40 million move from Hoffenheim in 2019 gave the scoreline an extra gloss that even Bruce would have to admit flattered his side, not that he will care too much.

Given that the last seven matches between these two sides have produced only seven goals, the television audience watching at home were probably not tuning in expecting much Friday night entertainment.

Newcastle came into the match having had fewer shots than any other team in the division so the return of Wilson from injury at least offered Bruce a focal point to his attack, even if they were missing the creativity of Allan Saint-Maximin due to a muscle injury.

Palace have lost 14 of their past 16 Premier League fixtures without Wilfried Zaha, whose partner gave birth to a son on Friday as the Ivory Coast international continues to isolate following his positive Covid test.

Having been restricted to just one start so far this season after being injured in a tackle by Brighton captain Lewis Dunk, Gary Cahill’s return meant Cheikhou Kouyaté was moved into midfield following his error in the defeat against Burnley, while Eberechi Eze was employed on the left of a midfield three having excelled in Palace’s victory over Leeds.

Bruce had admitted Newcastle must improve considerably after successive 2-0 defeats and they certainly started with the right intention as Cahill was forced to divert Joelinton’s cross behind inside the opening three minutes.

The visitors had managed four shots by the 20th minute as they pushed Palace back into their own half, although none that really troubled Vicente Guaita.

Following a series of corners, their opponents finally registered a first shot of the match soon afterwards when Karl Darlow was equal to Eze’s effort from roughly where he scored his first Premier League goal from a direct free-kick against Leeds.

The Newcastle goalkeeper has made more saves than anyone in the Premier League this season as he continues to deputise for Martin Dubravka and Bruce may find it hard to find a place for the Slovakian given his form. A one-handed reaction stop at his near post to deny a thunderbolt shot from Jeffrey Schlupp was truly outstanding and, much to his manager’s relief, kept his side level.

A mistake from Scott Dann then almost handed Newcastle the lead just before half-time, only for Joelinton’s weak effort to be easily gathered by Guaita.

Palace started the second half on the front foot and should have gone in front when Kouyaté rose to meet a corner but could only plant his header way over the bar. After another attack that ended with Jordan Ayew failing to hit the target, Bruce leapt out of his technical area and bellowed “Jamal get tight” at his offending full back Lewis.

Despite their defensive proficiency, however, Hodgson’s side had achieved only one clean sheet this season in their opening day victory over Southampton and Newcastle could have broken the deadlock if Joelinton could have shown more awareness after linking up with Jeff Hendrick.

Wilson was next to spurn his opportunity after meeting Javier Manquillo’s cross from the right flank before substitute Christian Benteke’s header failed to trouble Darlow in what seemed like a recurring theme.

Yet if those attempts were bad, Joelinton still had something worse up his sleeve. Substitute Matt Ritchie’s cross was begging to be headed past Guaita but the Brazilian made only the faintest of contact with the ball and immediately dropped to his knees in embarrassment.

Benteke’s header from Patrick Van Aanholt’s cross with 10 minutes still to play finally managed to force Darlow into another save.

It was Palace who looked most likely to snatch victory at the death as Michy Batshauyi was inches away from turning in Van Aanholt’s cross but Wilson and Joelinton had other ideas. – Guardian