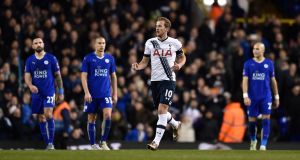 An 89th-minute penalty from the substitute Harry Kane secured an equaliser for an increasingly desperate Tottenham Hotspur and ensured that neither side can head into Wednesday night’s Premier League reunion here with an air of superiority. But having picked the stronger team, taken an early lead and dominated the first half, Spurs cannot have anticipated needing a somewhat generous handball decision – Nathan Dyer seemed to have little idea of where precisely the ball was as it spun into the air as Danny Rose tried to take it past him – to somehow escape defeat against a team that beat them 2-1 here in last season’s fourth round and came desperately close to repeating the feat.

Claudio Ranieri had promised to “change a lot” and duly made eight alterations to his starting lineup; Mauricio Pocchettino promised to “respect the competition a lot” and so made only seven. Both sides started without their leading scorers, with Kane on the bench and Jamie Vardy recovering from a groin operation, and their next most prolific players, with both Dele Alli and Riyad Mahrez also among the substitutes, but Spurs still had a more experienced team. Only Josh Onomah, veteran of nine minutes’ league action – spread over four substitute appearances this season – lacked significant top-level game time, even if Kevin Wimmer’s had all come before his £4.3m summer move to White Hart Lane from Cologne, with his one start since coming against Monaco in the Europa League precisely one month ago.

Leicester meanwhile gave Demarai Gray, their new signing from Birmingham, a widely expected debut, while Ben Chilwell, Marcin Wasilewski and Yohan Benalouane – three-quarters of their back four – had a solitary league start this season between them, even if the last two, at 35 and 28 respectively, are hardly novices.

In the circumstances it was hardly a surprise that in the first half Tottenham appeared a fine side shorn of a cutting edge while Leicester were occasionally uncertain in defence. Onomah’s influence was perhaps less predictable, the 18-year-old involved in many of his side’s best moments including their early goal.

Though nominally stationed on the right of a strikerless attacking trident also involving Nacer Chadli and Son Heung-min, Onomah frequently drifted left, and in the eighth minute launched into a driving run that roused the crowd even if he eventually lost the ball. No matter, it was swiftly won back and returned to him, and his first-time flick released Chadli, whose driven low cross was pushed unconvincingly away from goal by Leicester’s captain, Kasper Schmeichel, only for Christian Eriksen to arrive from deep to side-foot the loose ball precisely into the corner of the goal.

For a while after the goal, as the home side settled into their rhythm and their opponents searched shakily for theirs, an emphatic home win looked likely. Wasilewski fouled Son and then Chadli, earning a booking for the latter, while Eriksen’s dipping free-kick was pushed away from goal by Schmeichel, and a lovely move in the 18th minute saw Chadli flick the ball to Son, received a first-time return pass and then once again find the South Korean, who nutmegged Wasilewski and was preparing to shoot before Richie De Laet’s perfectly timed intervention. Indeed Spurs enjoyed 76% of possession in the first half, but still they did not go into the break with the lead, and within three minutes of the restart were behind.

The equaliser was not so much against the run of play as an affront to it, as Leicester, from nowhere, won and converted a corner. With Spurs apparently unsure how to deal with Nathan Dyer’s run to present Gray with a short option, the debutant swung the ball in and Wasilewski escaped Toby Alderweireld to head past Vorm.

Son, Chadli and Eric Dier saw shots from outside the penalty area saved with some ease by Schmeichel before half-time, and soon afterwards – from another Gray corner – the Foxes took the lead. This time his cross was initially cleared but, as Spurs pushed out down the right, Leicester regained possession and exploited the space behind them. Andy King passed to Shinji Okazaki, who had come off the bench at the break, and he ran into the area, beat Alderweireld with a dip of a shoulder and blasted a shot that bounced back to him off Vorm; he sent the rebound into the net off the near post.

Twice in the next 10 minutes Chadli might have scored, but he headed Son’s volley over the bar and then, having bulldozed his way into the box, saw a shot deflect into Schmeichel’s hands, but Tottenham appeared ragged and uncertain in attack as Leicester, with a lead to protect, dropped deep.

The arrival of Kane and Alli – if not that of Nabil Bentaleb, who came on to make a second appearance in all competitions since August – was therefore no surprise. Given their success this season, their lack of impact perhaps was, but though De Laet once again denied Son with a last-ditch challenge, Spurs rarely showed enough guile to suggest they could carve out a chance inside Leicester’s penalty area. There were some more long-range shots – Bentaleb with the best of them, with five minutes remaining – and the occasional corner, but Eriksen’s deliveries were repeatedly wayward. Hope seemed to be ebbing away, and time certainly was, until Rose – and the referee – intervened.