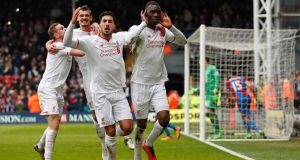 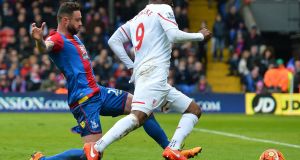 Crystal Palace’s Damien Delaney slides in on Christian Benteke of Liverpool, bringing him down and giving away the late penalty which saw the visitors win 2-1 in their Premier League clash. Photo: Glyn Kirk/Getty Images

This was the kind of result to knock the stuffing out of any team. Crystal Palace, already perplexed by a winless league run that stretches back to mid-December, should have sparked the recovery here only to implode at the last. If their own generosity had handed Liverpool a route back into this fixture, dreadful sloppiness presenting the visitors with an equaliser, then the point denied them in stoppage-time felt insanely cruel.

Christian Benteke, recently introduced to the fray, eased around Damien Delaney to the byline before taking to the turf dramatically at a vague hint of contact with his trailing leg. The linesman’s frantic waving had Andre Mariner awarding a penalty kick which the Belgian stroked into the corner, with Alan Pardew flinging his coat back into the dugout in disgust. This is a 12th league game without a win to leave Palace hovering on the fringes of the relegation scrap. Fortune has long since deserted them. They must some kind of resolve now if this campaign is not to veer into even murkier territory.

This had been a game theirs for the taking. If Liverpool had selected a team geared towards combating their hosts’ physical threat, wary as they were of what had occurred up on Merseyside back in November, then it was Palace’s pace which actually presented more problems. Yannick Bolasie has tended to revel against these opponents and he was a nuisance from the start, counterattacking at pace whether down the flank or through the centre. His early exchange with Emmanuel Adebayor, restored to the lineup for the injured Connor Wickham, should have yielded the opening goal only for Simon Mignolet to suffocate the winger’s close-range attempt.

Wilfried Zaha and Pape Souaré were just as threatening, the left-back’s delivery thumped on to the crossbar by Adebayor when he should have scored after more hesitant Liverpool defending. That Mignolet also denied the Togolese at his near-post and Yohan Cabaye belted another presentable opportunity into the side-netting reflected the reality that the home side had been the more urgent through a fractious opening period. The players had departed at the break with Jordan Henderson and Adebayor arguing, and Jurgen Klopp attempting to placate Cabaye after the Frenchman had been crunched once too often near the touchline.

The visitors had offered very little, Divock Origi curling their clearest chance on to the roof of the net, and were unlikely to remain unscathed for long. The corners sloppily conceded upon the restart duly cost them, Souaré and Mile Jedinak seeing attempts blocked or deflected away as Liverpool heaved but failed to clear their lines. Joe Ledley’s intervention was more emphatic, smashing a first-time shot through the mess of bodies in the area and into the corner of the net to provide Palace with the lead they merited.

Klopp flung on Philippe Coutinho in a bid to retrieve parity and should have drawn level when Origi side-footed wide from Adam Lallana’s cut-back but, by then, they were depleted. James Milner, who would have switched to right-back upon Coutinho’s introduction and already booked for a foul on Cabaye, had slid in to check Zaha’s counter and was dismissed. It was only the second sending off of the England international’s career, and his first for four years, but it left Palace in the alien position of playing against 10. Perhaps it was the expectation which affected them thereafter given there were sudden flashes of anxiety, the home side unnerved when they should have been dominant. Even so, their implosion was mystifying.

Alex McCarthy, on his first appearance since September, proved to be the fall guy. Ledley’s back-pass should have been dealt with easily enough only for the goalkeeper to slip as he connected with the ball and scuff his clearance straight at Roberto Firmino. The Brazilian collected and slid the ball through McCarthy for a seventh goal in eight Premier League games and, instantly, the whole complexion of the occasion was altered.

Benteke might have converted with his first touch, was denied by the goalkeeper with his second and Alberto Moreno spat a glorious shot from distance which rattled the inside of a post before rebounding clear. Then came the Belgian’s charge and collapse and a penalty slid in which laid to rest Liverpool’s recent league hoodoo against these opponents. Palace departed crestfallen, McCarthy close to tears near the tunnel, with the locals utterly dumbfounded by the brutality of it all. In truth, this all felt utterly in keeping with the second half of their season.