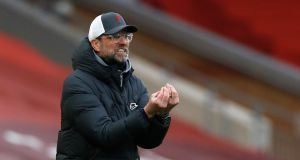 Yesterday’s defeat to Fulham at Anfield brought their tally of losses this season to nine, which is the same number of defeats Chelsea had suffered when they decided to sack José Mourinho after 16 matches of the 2015-16 season.

Comparing Liverpool’s current campaign with Chelsea’s five years ago, the first thing that strikes you is how differently the two coaches, José Mourinho and Jurgen Klopp, handled their team’s unexpected transformation into the laughing stock of the world.

Mourinho responded with rage: against cowardly referees who were afraid to give Chelsea the penalties they deserved, against the biased media with its secret agendas, against mentally weak players who collapsed at the first sign of adversity, against unnamed individuals in the Chelsea organisation whose incompetence had sabotaged the club from within, and so on.

He repeatedly pointed out that whatever the results seemed to be saying, he remained the greatest manager in Chelsea’s history. After the ninth and final defeat, against Leicester, he accused the players of ‘betraying his work’.

Mourinho may not have understood why his team had forgotten how to win but he did know one thing: he was not going to go quietly. He was going to make absolutely sure everyone else took whatever share of the blame he could deflect their way.

And Klopp? Klopp seems to be going quietly. Liverpool’s historic run of defeats has amazed the football world, but one of the oddest things about it is their manager hardly sounds surprised at all. He speaks about it in a tone of fatalistic acceptance: six home defeats in a row for the first time ever? That’s football etc.

A few weeks ago he was still getting angry with reporters who were trying to get him to say that his team was out of contention for the title. Yesterday he was asked a similar question about whether his team can still challenge for the top four and with a resigned and slightly absent air he replied that his ambition is much more humble: just to win one single game of football, that’s all he asks.

Does this calmness reflect an inner serenity, as of the religious believer who knows it’s all in God’s hands? Or are we watching exhaustion – the numbness of burnout?

You could argue it’s silly to make so much of Klopp’s subdued demeanour – as though a manager’s most important job, even more than training and coaching the team, was to act as a sort of emotional avatar for the club, performing the correct emotions for the cameras and transmitting them to the team and fans.

And that argument might carry more weight if Klopp had not always stood apart from his peers precisely because of his command of the emotional dimension of football. His way has always been to lead by example, to embody the spirit he wants to see from the players and crowd. Nobody is better at setting the right emotional tone. At least, not until now.

Almost as worrying for Liverpool as the string of Ls is the string of nils. They have failed even to score in eight of their last 12 league matches. What is going on? The excuses are familiar: absence of fans, injuries, sickness, tactical disruption, burnout, exhaustion . . . And yet these still seem inadequate to explain such a collapse.

Opta reported after the Fulham game that Liverpool have now failed to score with their last 115 shots at home: the longest such run on record, by any team.

Klopp would say that Liverpool’s great achievements of recent years – the comeback win against Barcelona – were only possible thanks to the depth and fervour of the team’s self-belief. By the same logic, they could not have pulled off the spectacular anti-feats of recent weeks unless they had become totally convinced of their own impotence.

How much of this is Klopp’s fault? Is the apparent exhaustion of his team somehow related to his having spent the first part of the season complaining about the impossible demands of the compressed schedule?

It would be a brave reporter who would put this to Klopp: “You predicted fixture congestion would lead to exhaustion, and now your players seem to be more exhausted than anyone else’s; do you regret this self-fulfilling prophecy?”

That might even be enough to bring back a flash of the angry Klopp of earlier this season.

A better question might be whether Klopp, who recognised the extraordinary demands of the season, has failed to adapt to those demands, particularly as his options have been drastically reduced by injuries.

For example, Liverpool’s pressing game needs a high defensive line. That’s fine when you have Virgil van Dijk and Joe Gomez, but not so much when you have Rhys Williams and Nat Phillips. Klopp has persisted with the system, but without top central defenders the system no longer works. Maybe he needed to come up with another idea.

Maybe others turned out to have better ideas. Last week, Pep Guardiola told Rio Ferdinand how he guided Manchester City back to their best by focusing on the concept of la pausa – literally, the pause – the composure and self-possession to allow that fractional delay that lets a space open up. He spoke about the importance of controlling the rhythm of the game, of understanding that sometimes it’s more effective to slow down than to speed up.

City won just three of their first eight in the league. Their problem, as Guardiola saw it, was: “We run too much... Of course without the ball the team always was ready to fight, always they have energy . . . but with the ball we were not good. We would not attack in ten passes, just attack in four passes, so quick, so quick, everyone was so quick. And in football there has to be some pausa... to change the rhythm. If you play high, high rhythm, then after you cannot surprise the opponent . . . We come back to that principle. And the quality of the players make the rest.”

Maybe this is just Guardiola the salesman, making a virtue of the general Covid slowdown by claiming it was all part of his plan. Gabriel Jesus, when asked by ESPN Brasil to say what had changed, revealed that Guardiola “speaks less”, and conducts fewer and shorter video analysis sessions, as though the coach has introduced the concept of pausa into his own ceaseless verbal promptings.

And Guardiola is right to mention the quality of the players; he might not be speaking so seductively about Rhythm and Pausa, if he had Nat Phillips and Rhys Williams at centre-back. But one way or the other, Guardiola has helped his team to rediscover their strength; the challenge for Klopp is to show he can do the same.