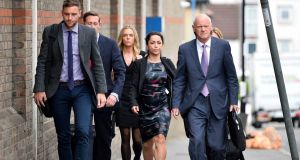 Former Chelsea team doctor Eva Carneiro arrives at Croydon Employment Tribunal where she is expected to give evidence in a case brought by her against the club and former manager Jose Mourinho. Photograph: Hannah McKay/PA

Former Chelsea manager Jose Mourinho has arrived for an employment tribunal in which the football club’s ex-first-team doctor accuses him of discrimination and victimisation.

The new Manchester United manager is accused of calling Dr Carneiro “daughter of a whore” in Portuguese, something which he denies.

His presence at the London South Employment Tribunal in Croydon on Tuesday was unexpected because it was not thought he was going to give evidence until next week.

Dr Carneiro alleges that she was sexually discriminated against after she went on to the pitch to treat Eden Hazard during the opening day of the Premier League season last August.

She claims that, as she ran on to the pitch during the game with Swansea, Mourinho shouted “filha da puta” at her.

In a statement to the tribunal, Mourinho conceded that he used the term “filho da puta”, meaning “son of a whore”, but insisted he had been using it throughout the match.

He said: “Filho da puta is a phrase I often use, all of the players know it. There is no sexist connotation in the use of the phrase — it is just like saying ‘f*** off’.

“In the world of football, a lot of swear words are used.”

He added that Cesc Fabregas had used the Spanish equivalent of the term when a Chelsea player was fouled during the game.

In his statement, Mourinho said: “Cesc and I both speak English well, but in the heat of the game we both swear in our mother language.

“Eva was not on the pitch at that point in time.”

Mary O’Rourke QC, representing Dr Carneiro, said: “He uses the word ‘filha’ because he is abusing a woman.”

The 42-year-old further alleges that, on August 10th last year, Mourino told Steve Atkins, head of communications and PR at Chelsea, that he did not want Dr Carneiro on the bench at the next match, adding: “She works in academy team or ladys (sic) team, not with me.”