Italian duo in the frame for Reading job 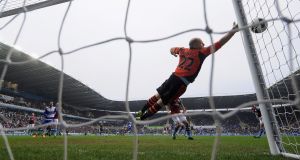 The 51-year-old McDermott departed yesterday with the Royals languishing in 19th place in the Barclays Premier League after a run of four straight league defeats.

The poor run of form leaves Reading four points adrift from safety and Russian owner Anton Zingarevich has made the decision that a new man at the helm will give the Berkshire club a better chance of securing top-flight survival.

Academy manager Eamonn Dolan is in temporary charge of the first team but former Swindon boss Di Canio, who left Swindon last month, remains the bookmakers’ favourite to succeed McDermott and Salako feels he could do be a decent appointment by Russian owner Anton Zingarevich.

“This might be the perfect moment for Paolo Di Canio,” Salako told talkSPORT.

“He has fallen out with the Swindon guys, he’s walked away, he’s in-between jobs and he might be the perfect answer.

“He could come in on an interim basis, they could say to him, ‘let’s see how it goes until the summer. Show us what you can do’.

“He would go and fire up that dressing room, grab people by the neck, throw cups of tea around and not let people slack off.”

Di Canio was present at Reading’s 2-1 home defeat at the hands of Aston Villa, which proved to be McDermott’s last game in charge, leading to strong suggestions that the ex-West Ham forward will be Zingarevich’s preferred choice.

But there are also suggestions that former Chelsea manager Di Matteo could be in line to return to the Premier League.

The 42-year-old led the Blues to Champions League success last season before being sacked in November and ambitious billionaire Zingarevich could see the ex-West Brom head coach as an ideal replacement.