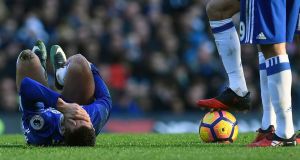 Chelsea will be without Eden Hazard for this evening’s Premier League game at Sunderland after the Belgium international was omitted from the league leader’s squad for the match on Wearside.

Hazard is understood to have suffered a knock in Sunday’s narrow victory over West Bromwich Albion, in which he was replaced late on by Branislav Ivanovic, and has remained at Cobham for treatment.

His absence represents a blow for Chelsea, who are seeking to secure a 10th successive topflight victory at the Stadium of Light to establish a six-point advantage at the top of the table. Hazard has been in resurgent form to date this term, operating from a free role on the left of an attacking trio, and has helped propel his team to the Premier League’s summit.

Antonio Conte is conscious of the cluttered nature of the festive fixture programme and, having intimated some in his squad were carrying knocks from the weekend when he addressed the media on Tuesday, was anxious not to take any risks with his players ahead of five matches in 22 days. He will hope Hazard will now be fit for Saturday’s trip to Crystal Palace.

Ireland boss Stephen Kenny: ‘I’ll do things my own way. Put it that way’ 06:00
Mickey Graham calls for some clarity from GAA on championship plans 06:00
Whole new ball game: Hats, scarves, facemasks - An Ulster final like no other 06:00
Damian Browne: To the ends of the Earth in search of the ‘savage warrior spirit’ 06:00
My favourite sporting moment: When Ireland rocked Kingston and rolled Pakistan 06:00