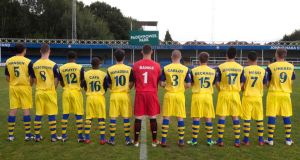 Farnborough players, with their new names on their shirts, pose for photos as part of the club’s new sponsorship deal with Paddy Power. Photo: David Parry/PA

Quite why anyone would want to trap a bag of cement was never completely clear, but less than silkily skilled footballers have often been accused of being unable to do so.

Which leaves you worrying for those Farnborough FC players with similar skill deficiencies who must now carry the burden of names like Diego Maradona, Pele, Zinedine Zidane and Johann Cruyff – all of whom (the originals, that is) could juggle a cement mixer on either foot before volleying it in to the net blindfolded.

There will, then, be somewhat raised expectations this season for, say, striker Daniel Bennett, whose biography on the Farnborough FC website offers little more information than “he won promotion with Chertsey” and “enjoys poker and Nandos”. Thanks to the club’s new sponsors, though, Daniel will be known from here on in as Lionel Messi.

Seeking publicity
Some accused Paddy Power yesterday of seeking publicity – which, bizarrely, some have provided by writing about the story – when they announced that “every player in the first team squad of Farnborough FC has changed their name by deed poll to that of a legendary footballer in their respective position”.

This will result in the above mentioned greats – as well as the likes of Franz Beckenbauer, Roberto Carlos and Paolo Maldini – lining out for Farnborough in the English Conference South against Chelmsford City on Saturday. You’d pay anything to hear Chelmsford coach Dean Holdsworth give his pre-match chat – “Bazza, you pick up Beckenbauer at corners; Chaz, watch out for Cruyff, he’s a tricky bugger”.

“It’s not all good news, Pele and Maradona have almost come to blows over who gets to wear the number 10,” revealed Farnborough gaffer Spencer Day, whose name has been changed to . . . Jose Mourinho.

How much has the whole business cost? Not a lot. The name-changing can be done for as little as £30ish in the UK, although if Farnborough eventually make it to the Champions League they’ll have to update their passports too so they can travel to Milan, Munich or Madrid. That will cost around £70 per person, which would bring the total price to in or about £2,000.

The players should know, though, that there doesn’t seem to be any going back. On the ‘change of name’ form, they have to agree to “absolutely and entirely renounce relinquish and abandon the use of my old name”. Daniel Knox-Hewson might not have been aware of this a couple years back when he changed his name to ‘Emperor Spiderman Gandalf Wolverine Skywalker Optimus Prime Goku Sonic Xavier Ryu Cloud Superman HeMan Batman Thrash’, telling the Daily Mirror at the time that “my Dad was worried I hadn’t thought of the social implications”.

A browse through the club’s fans forum yesterday indicated not all the club’s faithful were on side. “I’ve decided to change my name,” said one. “To William Hill.”

PS – William should know, it could be wackier – Brazilian Serie B club Atletico Goianiense have in their ranks this season Adriano Michael Jackson, John Lennon Silva Santos and Mahatma Gandhi Heber Pio.