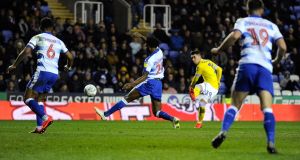 Leeds moved back to the top of the Sky Bet Championship with a convincing 3-0 win at Reading.

Mateusz Klich fired the visitors into an early lead in the 13th minute, slotting the ball home after Luke Ayling’s surge down the right.

Pablo Hernandez doubled the lead in the 22nd minute and the Spaniard drilled home another from 25 yards just before half-time.

Leeds edge a point ahead of promotion rivals Norwich, who host Hull on Wednesday night.

Sheffield United kept the pressure on the top two with a 2-0 win over Brentford at Bramall Lane, where forward Gary Madine had been sent off late in the first half.

Oliver Norwood put the Blades ahead from the penalty spot in the 26th minute.

The home side, however, were reduced to 10 men in the 36th minute when Madine was shown a red card for a tackle from behind on Bees defender Ezri Konsa.

Brentford, who had won their last two league games, responded after the break as Kamohelo Mokotjo saw his effort hit the post following a corner.

Republic of Ireland international David McGoldrick, though, made sure off victory when he headed in from close range with seven minutes left as Chris Wilder’s side closed to within a point of Norwich.

Bristol City moved back into the playoff places on goal difference after being held to a 1-1 draw at home against bottom club Ipswich.

Former Town defender Adam Webster broke the deadlock with a header at the back post in the 32nd minute, while an own goal from Lloyd Kelly saw Ipswich equalise in the 68th minute.

The Robins are level on points with Derby, who host Stoke on Wednesday night.

Ipswich, meanwhile, moved to within six points of second-bottom Bolton, who were beaten 2-0 at home by Sheffield Wednesday.

Steven Fletcher gave the Owls the lead shortly before half-time and winger Rolando Aarons made it 2-0 on the hour, while there was no way back for Bolton, whose troubles continue as a proposed takeover drags on.

Blackburn beat struggling Wigan 3-0 at Ewood Park, with a brace from Danny Graham.

Rovers took the lead through Graham from the penalty spot in the 39th minute.

After Latics frontman Nick Powell headed against outside post early in the second half, Graham scored again in the 54th minute when he got on the end of a long kick from the goalkeeper.

Wigan saw a goal from Lee Evans ruled out for a foul in the build-up, before Rovers completed their victory through Bradley Dack with four minutes left after a defensive mix-up.