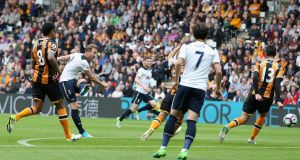 Harry Kane capped another prolific season with a second hat-trick in four days to secure the golden boot for the second successive season as Tottenham demolished relegated Hull 7-1 at the KC Stadium.

The England striker fired four in Tottenham’s 6-1 thrashing of fallen champions Leicester on Thursday to overtake Everton’s Romelu Lukaku in the Premier League scoring charts and struck three more to take his tally to 29 for the season as Hull were torn apart.

Kane scored twice in the first half and completed his hat-trick midway through the second period, with Mauricio Pochettino’s side celebrating their best top-flight finish since 1963 in fine style.

Two goals from Kane in the opening 13 minutes swept Tottenham in front and Dele Alli put the game to bed on the stroke of half-time.

Although Sam Clucas pulled one back for Hull midway through the second period, Victor Wanyama, Kane, Ben Davies’s thunderbolt and Toby Alderweireld turned the final game of the season into a rout.

It was a sad end to the season for Hull and their popular head coach Marco Silva, whose players were no match for the free-flowing Londoners.

Chelsea celebrated lifting the Premier League trophy with a record 30th win as relegated Sunderland were dispatched with ease as Antonio Conte’s side won 5-1 at Stamford Bridge.

The result ensured the Blues became the first side in a 38-game season to win 30 games.

And Conte will seek to end his first season as head coach with a double with victory in next Saturday’s FA Cup final with Arsenal.

John Terry handed over the captain’s armband to Gary Cahill after a guard of honour which marked his first-half substitution and final Stamford Bridge appearance for Chelsea.

Fernando Llorente crowned Swansea’s fine finish to the season as his late strike helped secure a 2-1 win over West Brom at the Liberty Stadium.

Llorente’s 15th goal of the season – 11 of which have come at home – saw Swansea complete a second-half recovery after Jonny Evans had headed West Brom into a 33rd-minute lead.

It was a goal worth two Premier League places, as Swansea capitalised on defeats for Burnley and Watford to rise to 15th in the final standings and earn an extra £4 million in Premier League prizemoney.

Tony Pulis’s side have tailed off badly since reaching the 40-point mark and end the season in 10th spot.

Jamie Vardy rescued a point for Leicester as the outgoing champions ended their campaign with a 1-1 draw against Bournemouth.

The England striker netted his 16th goal of the season as last term’s Premier League title winners finished 12th after a turbulent year.

Junior Stanislas opened the scoring for Bournemouth after just 57 seconds but the Cherries could not hang on and they needed Ryan Allsop to again deny Vardy, who also had a goal disallowed for offside.

The draw sealed ninth place for Bournemouth – their highest league position in their 118-year history.

Leicester’s attention now turns to resolving the future of manager Craig Shakespeare, with talks expected this week over whether he will stay as boss beyond June.

Shakespeare signed a deal until the end of the season when he replaced Claudio Ranieri, who was sacked with the Foxes in relegation danger, in February.

Owner Vichai Srivaddhanaprabha offered no hints over their plans in an interview in the club’s programme, but he will at least be heartened by Leicester’s fightback after conceding so early.

Southampton suffered a 1-0 home defeat to Stoke in what may prove Claude Puel’s final game as manager.

Their club’s hierarchy had revealed plans to review his position at the season’s end, offering him minimal support, and after their latest defeat and inability to score for a fifth straight game at home, may act despite finishing eighth in the Premier League.

Increasing hostility from the club’s supporters will also add further pressure on the Frenchman’s position, whose team lost after a second-half header from Peter Crouch that took Stoke to 13th.

Already assured of survival and their highest finish since 1975, the Clarets were in the mood to celebrate on the final day and Sam Vokes enlivened the atmosphere further by putting them ahead.

But Sofiane Feghouli responded with a quick leveller and, after Sean Dyche’s men wasted several chances to reclaim the lead, Ayew punished the hosts by pouncing on a rebound after 72 minutes.

It made for a slightly disappointing end to the season for Burnley, who had claimed 10 of their 11 wins at home, but the appreciation of their fans for a fine effort was not tainted.

Enthusiasm got the better of a number of supporters as they ran on to the pitch at the final whistle, delaying the team’s planned lap of appreciation, but the area was cleared by stewards.

They can still look ahead to next season in good heart while West Ham, despite the result, must take stock after a campaign in which they have slipped back.